Pet thief guilty of stealing $2.50 Tortoise from ‘friend’ during CB

Roger Khoo Zhen Xuan, 36, broke into his childhood friend’s home on May 23, 2020, at the height of Circuit Breaker measures to annoy him. Annoy his friend he did, so much that he pleaded guilty to one charge of criminal trespass while another charge under the Covid-19 (Temporary Measures) Act 2020 was taken into consideration.

According to a report by The Straits Times, Khoo broke into his friend’s home while the latter was away, and told the court he wanted to get a tortoise that was promised to him. So he scooped up the tortoise that cost $2.50 and called a locksmith to fix the lock he broke when he forced his way in.

He then took the tortoise home and posted it on social media.

Khoo told the court he only wanted to annoy his friend when he broke into the flat in Sembawang, and that the tortoise was promised to him anyway.

The victim said he promised no tortoise to Khoo, and he arrived to find the gate open and the door to his home askew. The contents of the room looked ransacked as well, the tortoise missing. Upon checking his phone and social media, the victim saw Khoo posing in a photo with the tortoise he stole, claiming it was his pet.

The police received a call from the victim at 11:50pm that same day, and the pet has since been returned to its owner.

According to the same report, “Deputy Public Prosecutor Alexandria Shamini Joseph said a psychiatric report from last year showed that Khoo has bipolar disorder, and was suffering from an episode of manic relapse at the time of the offence.”

The defence lawyer said that his client was undergoing treatment and was taking medication for his condition. Khoo posted bail worth $10,000 and is set to return to court for sentencing on March 1.

Netizens have chimed in on what they think is one of the silliest cases at the start of the year.

One commenter said what we were all thinking, and how much trouble everything was for a $2.50 tortoise. Was the tortoise that special?

Why would you do this thing to a ‘childhood friend’ anyway?

With a possible jail sentence of up to three months, this seems like a lot for a $2.50 tortoise. Couldn’t he just have bought his own? Or did he needed to inflict some pain on his ‘friend’?

Some commenters said that Khoo was probably crazier than ex-President Donald Trump.

This tortoise wasn’t involved in any crime, on the other hand, and was merely crossing the road. A motorist caught on camera a video of a rider helping the animal along, lest it get run over by other vehicles who may not have seen it crossing.

The incident happened in Bukit Panjang. Look at that tortoise go!

Netizens praised the motorcycle rider who helped the animal, and the two cars who were on the road when it happened waited patiently for the tortoise to finally get to the other side safely. Prima Taste, the only Singaporean brand on the list, has topped the annual “Top 10 Instant Noodles of…
byIrone Kim 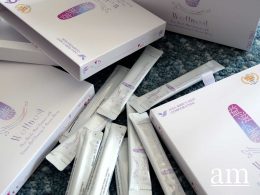 Smile, Tear, Sip and Stay in the pink of health with Wellnest Bird’s Nest and compete to win $367,888 worth of cash and prizes