Disney’s Mulan: How historically accurate are the characters’ looks?

Are the costumes and make-up in Mulan historically accurate?

The answer is nope.

Sure, Mulan is a Disney movie and not a documentary, so we can grant the movie some artistic liberties.

But has the artistic freedom resulted in a good or garbled look? Read on to decide!

While the movie does not explicitly state its time period, Bina Daigeler, the German who is the movie’s costume designer, mainly drew her inspiration from the Tang dynasty (roughly from the 7th to 10th century).

Daigeler was also quoted as saying  “I was focused on treating respectfully the details of Chinese culture”.

Many of the looks in the movie are actually a mish-mash of elements from different time periods in Chinese history.

Western audience might not find anything amiss, but to Chinese viewers, something might feel a bit off, and to learned eyes of Chinese sartorial history, it might look especially grating.

“Nobody paints their lips this full in the past”, Singapore’s resident hanfu expert Gong Pan Pan, otherwise known as Hanfugirl (@hanfugirl) on Instagram, had this to say about Mulan’s painted lips.

Tang ladies will only paint the center part of their lips to create the illusion of small cherry lips (樱桃小嘴).

Hanfugirl also took the initiative to give Mulan a more historically accurate makeover. Both versions side by side below. Notwithstanding historical accuracy, which do you like better?

By the way, if you are wondering about the yellow forehead, it was to emulate the Buddha’s glow, and was really a look in vogue during the Tang era. Meanwhile, the two dots beside the mouth were called painted dimples.

The purple wrap dress that Mulan donned for her matchmaking appointment is called Quju (曲裾) which means curved-hem robe.

But Hanfugirl pointed out that this one-piece wraparound style was worn a few hundred years before the Tang dynasty during the Han dynasty, and by Mulan’s time, had already “faded into obscurity”.

Notice that Mulan is wearing a tube inside her dress, the tube is in Tang style, according to Hanfugirl. Now at least that’s one thing that is true to the time period.

Notice also the ornate embroidery on Mulan’s sleeves and collar- Hanfugirl pointed out that this doesn’t fit Mulan’s status as a commoner.

Back in those days, only the elites could have decorations on their sleeves and collars. This was also how the Chinese term for leaders – 领袖， which literally translates into “collar and sleeves”, came about!

Taking a closer look at the embroidery, Hanfugirl said that the complicated designs on Mulan’s dress is closer to the style of the Qing dynasty, which is about a thousand years after the Tang dynasty!

So in essence, Mulan’s whole matchmaking get-up is a fusion of styles from three different dynasties- Tang, Han and Qing!

Eclectic or garbled mix? You decide.

Jet Li and the Fu Manchu side by side. Who is Fu Manchu? And is this similarity a flattering one?

Fu Manchu was a fictional Chinese villain who first appeared in a series of novels by British author Sax Rohmer during the early 20th century.

Fu Manchu is now regarded as an offensive symbol of Western stereotypes and discrimination against the Chinese.

Villages dressed in colours they are not supposed to

The villagers in Mulan’s village are all dressed in vibrant colors in all hues of the rainbow. While this makes for nice visual effect on the cinema screen, reality is much more drab.

“In the Tang dynasty, plebeians like us could only wear yellow or white colour and especially men were not allowed to wear colours such as purple, green and red because they were reserved for various ranks of officials…

“One of the more pragmatic way of looking at it is, it was an extremely laborious and expensive thing to dye clothes using natural dyes. The more vibrant and darker the colour of the fabric, the more number of times you have to put your fabric in the dye and dry and dye and dry. In ancient China, it was also deemed immoral to be vain and excessive in your dressing since the state promotes agricultural practices more than commercial practices（重农轻商）. They did not want people to indulge in profiteering, but instead to just work hard to earn their keep and to know their place. Of course these restrictions only applied to plebeians like us, while aristocrats and the well-connected were often found with excessively decorative and expensive accessories and gowns.” 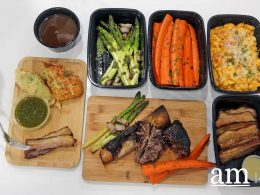 Sunday Catering, the delivery-only, sister brand of ribs specialty restaurant, Morganfield’s, has rolled out a Father’s Day menu that…
byalvinology 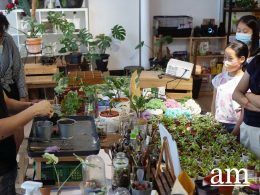