Singaporean netizens bash iPhone 12 for lack of charger in box

Just when you thought that the lack of a headphone jack in the latest Apple iPhone 12 release was something we all had to swallow manfully, here we have to accept that the company seems to be dead set on making pervious accessories obsolete and new adopters of the Apple flagship phone spend more.

Singaporean netizens are not happy, but some are still pushing the Apple agenda like it’s simply business as usual.

Does the iPhone 12 have no charger?

According to the latest release on the iPhone 12, the box will feature one unit of the phone, and a charging cable. Users would no longer have an adaptor or earphones as part of the package. The statement released by the multinational electronics and software company is that they can boast a lighter package when you buy the phone.

Well, of course it would be lighter, especially if you take out what you usually offer with the phone.

Aside from the changes with hat you get when you buy a phone along the price tag of an iPhone, the cable you get will not be compatible with older models’ accessories, since it features a Lightning to USB C cable. Previous iterations of the cable were Lightning to USB A. This means that new users would have to buy a separate charging adapter if they do not have a USB C-compatible accessory.

How much do the new Apple accessories cost?

Since they aren’t shipping units with an adapter, you can bet that they’re selling the missing accessory separately. According to website Apple Rumor, the company is selling the USB C charging adpater for $20 US. This accessory comes with the newest iPad Air model, so if you want to get it “for free,” you can buy an iPad Air first.

What did Singaporean netizens say about the change?

Typically, the Lobang crowd and Singapore techies, normies, and brand weighed in on the latest development, and a lot have expressed their disdain, they’re ambivalence, and even excitement for the latest lack of accessories.

Some took issue with how Apple defended their new policy with shipping units. They asked if forgoing all the accessories when they buy a unit will net them a discount.

This commenter on the other hand, said that only people who don’t patronize the brand have problems with the newest development. They also mentioned the Xiaomi brand, and how it is allegedly associated with people who buy cheaper phones.

And this commenter mentioned that there is nothing in the brand’s new offer that legitimately reduces their carbon footprint, since people would still buy the charger separately. They suggested to stop releasing new phone models and give longer warranties, which will reduce how often people change their handsets.

While this commenter, on the other hand, found a way for Apple to donate needed chargers to people who don’t have any–but said that this defeats capitalism and using the phone as a status symbol. The commenter said that the reason does not sit right with him, because it just means the waste won’t be coming from Apple itself unless the customer pays for it.

And finally, one commenter broke down what they thought would be the cost for a new iPhone 12 outside of the new unit. They included the cost of protectors, cases, and the needed charging accessories.

What do you think of the latest on the iPhone 12 no charger policy? Tell us in the comments!

In a rather bizarre but poignant incident in Sim Lim Square, a man called “Little Mouse” made a…
byDanielle Ann 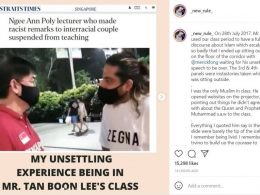 Who is racist ex-professor Tan Boon Lee and does he hate all religions? 6 Things to Check Out at Teochew Festival 2016