Another new week, another round of closures and liquidations as reported by various business groups–and this time, it was the inevtiable demise of some of Singapore’s previously-vibrant night spots. 45 of them have reportedly filed for formal liquidation proceedings, with more probably going the same way.

How bad is it?

According to a report by Malay Mail, bespoke cocktail venues are still closed and karaoke bars have completely stopped operations. 45 of the 1,800 night spots registered with the Accounting and Corporate Regulatory Authority have conceded defeat to the Circuit Breaker measures. The closures have been happening since April and continued until June.

Most of these establishments would only be allowed to open for Phase Three of the Circuit Breaker, but it’s clear that not a lot of them will make it to that point.

But it could be much worse.

Joseph Ng, president of Singapore’s Nightlife Business Association said that the number could very well be much higher. He said that many more than the 45 listed companies that closed have let go of all their staff and had sold off all their assets.

He added that they would not be coming back.

The same report said that karaoke operators who were unable to pivot due to their lack of licenses and the training of their staff were the ones most likely to close forever.

According to Malay Mail, “Mr Ronald Ng, chairman of the Singapore Entertainment Alliance, which has about 100 members such as Party World and Teo Heng Karaoke chains, said tight licensing regulations make it very difficult to apply for new licenses.”

This meant that unlike bars and other drinking establishments that used to dot Singapore’s night life, karaoke joints could not apply for licenses to pivot to online food delivery, providing meals, or simply using their space for another business with the same staff quickly.

Read about Daniel Ong’s plea to save is Rookery restaurants and how it backfired on him.

While bars could easily shift to delivery and meal service since they already had the kitchen to provide, karaoke bars simply did not have the equipment to service orders and clients big enough to ensure their survival. What’s more, their staff did not have the competencies needed to cook and prepare meals.

Which karaoke bars close in Singapore?

The same report mentioned that some of the bars that closed included Bier Valley Pub, the Pub DSoul branches at River Valley Road and Serangoon Road. These three along with thirteen others have closed.

While the alliance has yet to approach the government for help during the crisis, Ng has mentioned that the authorities should know how hard Circuit Breaker measures have hit the entertainment industry.

Owner of Founder Bak Kut Teh defends himself from naysayers.

“If we have to remain closed for several more months, then I hope the Government can help on our rental at least. I think this is the most important and difficult part for us,” said another karaoke business owner, referring to the ceasing of rental rebates this July.

Which nightspots are surviving?

Establishments like Marquee Singapore and Zouk Singapore, though, have survived through online streaming of their club events. Patrons are encouraged to give tips to help out their staff and the business while providing the music and vibe online.

Other bars that were lucky to have food licenses have turned their premises into dining areas. Zouk Singapore at Clarke Quay had successfully turned one of its lounges into Capital Kitchen pop-up restaurant.

Be like Mark Lee. Not Daniel Ong. Read why here.

While seating 100 customers at a time, the revenue is still only 40% of their usual taking. But for now, these businesses are waiting and working to survive until Circuit Breaker eases, and Singaporeans can return to their night spots. Home-grown designers have come together to create 1959, a new line of lifestyle collectables, to commemorate the 60th…
byIrone Kim 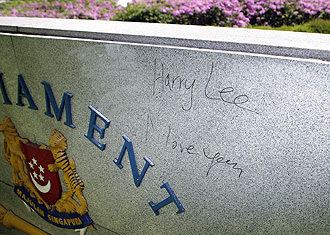 Via Straits Times.com. As most Singaporeans would know, Harry Lee is the English name of our Minister Mentor…
byalvinology