Another day, another trash pile masquerading as a human being–and this time it’s a 27-year-old Indian filmmaker named Daniel Shravan who has penned one of the most offensive opinions about rape ever spoken on a public platform.

What do Daniel Shravan’s wife, family, and kids have to say? According to some Facebook comments, he has a daughter.

Who is Daniel Shravan?

While he is a film-maker, reports have said that he is an emerging talent in the South Indian film industry. He could have gotten acclaim over films he’s made, but instead he’s most known for his offensive comments against women, which come in the wake of another brutal rape-slay case in India. Dr. Priyanka Reddy’s charred remains were found under a bridge near Hyderabad.

Four men, including a lorry driver, have been arrested in connection to the case. Politicians in India have called for the suspects to be “lynched” in public, and women around the country have begun to march to ask for a fast-tracked investigation.

What did Daniel Shravan say about raping women?

While it’s normal to see misogynists give opinions entrenched in rape culture and betraying their condescension towards women, few have come close to how appalling Daniel Shravan considers women.

In his post, he urges the government to legalize “rape without violence,” which means he supports the rape, but not the murder that happens afterwards, which is common in India.

He also wants girls to be educated about rape–which to him means that girls should learn not to deny men their sexual urges. He thinks that killing rapists will not stop rape from happening just as how killing Osama bin Laden would not stop terrorism.

He said that if girls and women carry condoms and satisfy their rapists, then these men would not kill them after the deed is done.

He also said that it is only logical that if men have gotten what they wanted from the rape, that these rapists would not murder their victims.

He was also concerned that the Nirbhaya Act that allows for the death penalty to be sentenced in cases of rape would frighten rapists. He finished the abhorrent comment above with the statement, “Better women should accept men’s sex.”

He echoed the same sentiments on his own Facebook post on his profile, which had more horrible statements such as, “If these adamant bitches didn’t consent to the proposal made by the rapists, they will have no other way but to rape them”.

Do you think Eden Ang is one step away from becoming a Daniel Shravan?

In a separate report, a women’s group named “Narisena” approached a woman to do a video, and claimed that the woman was Daniel’s mother.

The woman, who appeared unaware of the comments made by her alleged son, was shown the offending posts. She expressed sadness and shame over the comments and post, and told her son that he should beg forgiveness.

Villainous script or pathetic excuse of a rape-y weak man?

The offending comment and post have since been deleted from Daniel’s profile, and he’s since claimed that these were not really his opinions, but a script for a villain he was writing for one of his films. 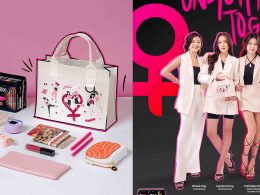 Kotex Singapore launches its campaign “Unstoppable Together” in partnership with lifestyle brand kāi by bellywellyjelly, and its founder,…
byIrone Kim