Instead of the usual reports of National University of Singapore (NUS) or Nanyang Technological University (NTU) students molesting or taking videos of bathing women, TODAY reported that an old man has been sentenced to three weeks of jail for roughly the same offense.

The 67-year-old security guard, Marimuthu Jayabal, was said to have caught the 20-year-old student’s eye on the MRT and licked his lips. Between them were glass panels and the MRT doors, and the student was trying very hard to ignore the security guard.

The older man gestured to the younger male student, pointing to the former’s shirt, which apparently meant that he would pay the latter to sit next to him on the train.

The student ignored the security guard and the obscene offer, but the latter was persistent, and was the one who transferred seats instead to sit beside the victim. He then showed the younger man a pornographic video on a mobile phone, and asked him if he liked what he had seen.

The student replied, “No,” then the molester rubbed his thigh. The student eventually got off at Bukit Gombak station, but Marimuthu followed him. The student went to a police station at 6:30 that evening.

Read about Monica Baey, first student to speak out against the light sentencing of Nicholas Lim, who took a video of her showering.

For rubbing the student’s thigh, the old molester was sentenced to three weeks in jail, where another charge of publicly exhibiting an obscene object by showing the pornographic video affected the sentence.

Crying and wailing in court, afraid of handcuffs and jails

The molester told the judge that he did not want to be handcuffed since he was afraid of the objects. Thanks to the sentence passed on Tuesday, October 8, he would be going to jail for the very first time.

When the sentence was read and the court ended session, he started wailing and crying. Just like NUS student Terence Siow, Marimuthu tried to get his sentence reduced during his mitigation hearing. He did not succeed, though.

He attended the hearing without a lawyer, and kept insisting that he was extremely afraid of hancuffs, prisons, and jailtime, and pleaded to be given a fine instead of a stint in prison.

Terence Siow, an NUS student, was able to mitigate his sentence thanks to his good grades and a supportive family.

“I am afraid of the dark, confinement and handcuffs. I don’t want to go to prison. Even when I was arrested, I was led away without any handcuffs,” he said in Tamil using the help of an interpreter. “Your honour, I will not reoffend. Please forgive me, sir. Your honour, I have repented. I am a Christian,” he continued. He also said that as the sole breadwinner of his family, his sickly daughter and elderly wife all depended on the $80 he took home everyday from his job. He continued to say that he has a collapsed hip joint and a heart ailment as well.

The prosecutor handling the case, however, said that people must be deterred from committing such crimes by imposing jailtime, as highlighted by Parliament. This is after a slew of cases that figured NTU and NUS students receiving no prison time for offenses that involved stalking, touching the private areas of victims and even taking videos of women showering.

Read about Terence Siow, the NUS student who molested a girl on a train but got no jail time at all.

The prosecutor also said that the acts done by the accused, which included licking his lips, following the victim, and even showing the video to the student showed that there was serious premeditation to his actions. Royal Philips is a diversified health and well-being company, focused on improving people’s lives through meaningful innovation in…
byalvinology 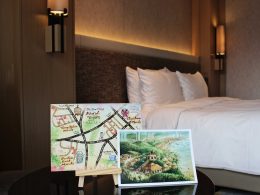