Relay Majulah, Singapore’s first-ever 2,000-kilometer relay run, today announced its initiative to collectively challenge 200 runners to complete a nation-wide relay under 200 hours – all in an effort to raise a million dollars for the President’s Challenge. Centred around Singapore’s Bicentennial Year, the relay run will be marked as the largest and longest relay run in Singapore history.

Relay Majulah aims to share the determination and grit of local individuals who have persevered in their adversaries. Each of the 200 runners is being challenged to each complete a 10-kilometre or 20-kilometre stretch to collectively achieve the total targeted time and distance.

Running towards a magic number

Come 2 November, 200 runners from all walks of life will come together to participate in Relay Majulah with a collective goal of raising a million dollars for close to 70 charities under the President’s Challenge.

Flagging off at noon from the Singapore Sports Hub, a baton will be passed from runner to runner as they journey past significant landmarks, such as Bedok Reservoir Park and Punggol Waterway Park. Hitting the turning point at Yishun SAFRA, they will then see the route follow back to the hub completing all but the last relay.

On 10 November, Tan Chuan-Jin, Speaker of Parliament, will run the final leg from the Singapore Sports Hub and finish off into the MES Theater at MediaCorp’s Campus for the live televised President’s Star Charity Show. Concluding the relay, he will then symbolically hand over the baton to President Halimah Yacob on-air, along with a giant cheque that will represent the total amount raised.

In the lead up to the flag-off date, each runner will be also challenged to raise $5,000, tallying to a grand total of a million dollars that will be towards providing assistance, care and support for beneficiaries of the 67 charities supported by President’s Challenge.

Over the years, the Standard Chartered Singapore Marathon (SCSM) has become a platform for runners to support a variety of social causes through sport. In support of the President’s Challenge this year, SCSM will be partnering Relay Majulah to champion the spirit of giving back.

Members of the public can also show their encouragement through making donations via Relay Majulah’s Giving page, or to specific runners. 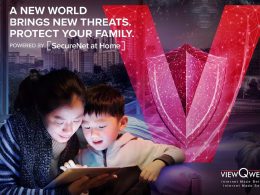 ViewQwest announces the launch of SecureNet for homes and small and medium enterprises (SMEs) in Singapore. SecureNet is…
byIrone Kim