Another day, another bunch of sad, perverted Singaporean men. This time, they’re on Carousell trying to buy used, unwashed clothes from a female seller who happens to have an attractive profile photo.

Singaporean Instagram user and Carousell seller FAith Yeo recently posted a series of screenshots on her stories of messages sent about the clothes she’s selling on Carousell. Carousell is a popular online marketplace where netizens can put up their old and new items for sale. Preloved items such as clothes, bags, shoes, and other fashion items are wuite popular, with some celebrities even using the platform to declutter their closets of expensive, branded goods.

But just like any social platform (there is still a social element to the site, as you can send messages, like items, and follow sellers), people who have no scruples or respect tend to ruin it for others. Just take a look at what Instagram user Faith Yeo has to put up with:

This person was asked why he would want to buy used and unwashed clothes. He simply says that he is a guy and confirms that he is a Singaporean guy. What a shining example. This one even specifically asked for used brassieres that she hasn’t washed. She may want to “get rid” of some of them. 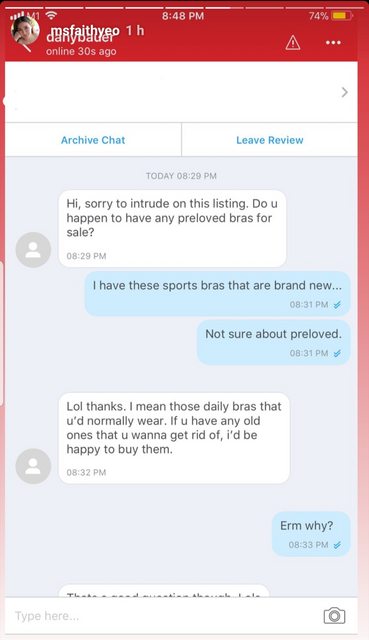 She even gets disgusting and unsolicited comments about her body from strangers, which is downright creepy. Some guys think it’s okay and it doesn’t cause offense. If she wanted you to comment on her body, she wouldn’t want it on a selling platform. 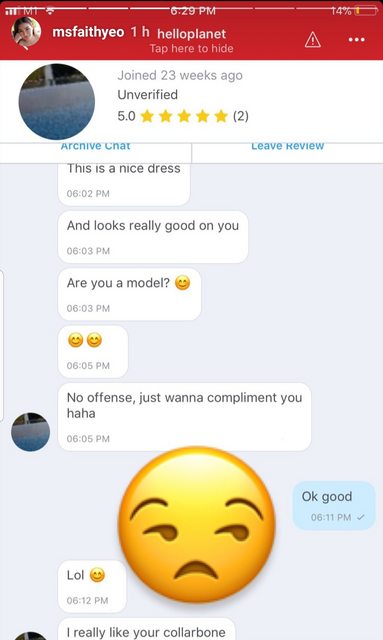 One guy even said that he is sorry if he is rude. So if he knows he’s rude, why does he continue his overture? There are other platforms, and Carousell isn’t Tinder. 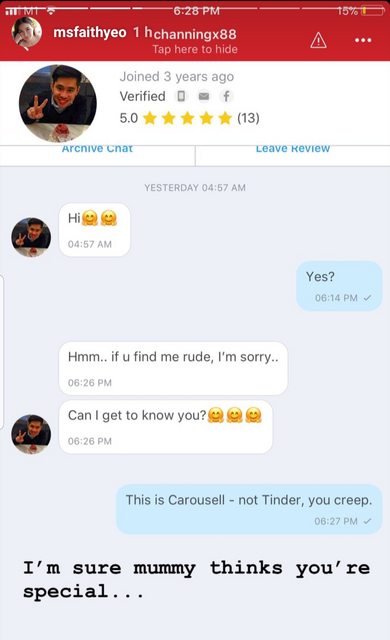 Faith probably wants to make a point with her questions about citizenship, as she thinks that most of the persons contacting her in an inappropriate manner are male Singaporeans while others are simply too full of it to realize that she isn’t interested in them at all. 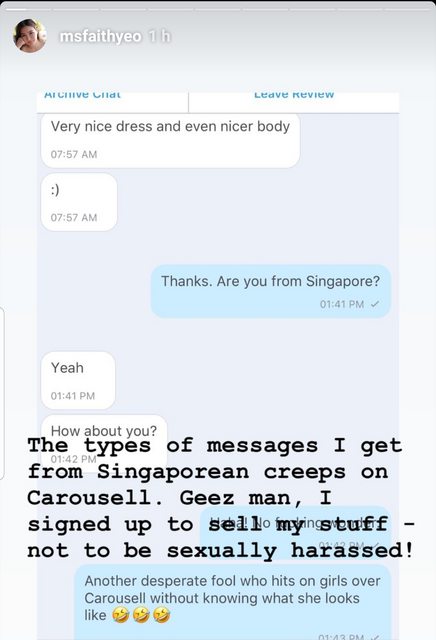 Is the dating scene that bad that guys have to prey on girls (without even seeing her profile photo)? Are etiquette and common sense disregarded in the age of social media and guys think that as long as they can message a woman, they can hit on her?

What do netizens say about this horrid practice?

Here are some of the most poignant comments about the messages Faith receives:

This person says that people like this aren’t uneducated and that they are not evil and are only socially awkward. Is it an excuse for unsolicited comments?

So when a guy wants to buy a preloved bra he probably wants to get a bargain and use it for himself? What other reason could there be?

This comment mentions girls who use the public attention to make themselves look more attractive.

Some point out that there may be racism involved, and that girls prefer foreigners to Singaporean men. Even if this were true, it doesn’t change the fact that the people in the messages are creeps.

And someone also said that this was the first time they’ve ever seen someone actually highball for anything on a selling website.

Singaporean girls and their Instagram accounts are the latest targets of online perverts, read about it here.

What do you think of Faith’s experience? Let us know in the comments!

The Theatre Practice announces the imminent release of the second instalment of The Nursery Rhymes Project, a three-part…
byIrone Kim

Portable, powerful and ready to party, the JBL PartyBox On-The-Go is here! Designed for the ultimate mobile party,…
byIrone Kim How to café-hop without stepping out the door

It’s official – food delivery service Deliveroo now delivers across the whole island! Whether you are located in…
byRachel Chan

Naomi Neo and her husband welcome their baby at Thomson Medical today, June 25, 2018. The first indication…
byDanielle Ann
Hello. Add your message here.
See how Snapask has been helping out over 3 million students around the world. Find a perfect plan