Did you want to purchase a KAWS: Summer UT from the Uniqlo website or app when it dropped at midnight on June 3? Then you most probably would have been cursing futilely at your empty cart three hours later. So you join the queues at a brick-and-mortar Uniqlo store in the day. And just when you think you’re finally close to getting your hands on some KAWS…

Someone has coolly wiped out all the tees in your size. That person has 40 to 50 tees in his shopping basket, and he’s not the only one.

The summer collection is a collaboration between Uniqlo and the American artist KAWS (Brian Donnelly).

Singaporean netizens took to Uniqlo Singapore’s Facebook page to complain about their “horrible horrible horrible experience” when they failed to secure the coveted KAWS tees on the same day of the launch. Check out all the irate comments on this Facebook post.

Shoppers who had not expected to spend more than five minutes checking out at midnight found themselves losing more sleep than they had bargained for.

Wrote Facebook user Wendy Wong about 1am on June 3: “items added but not into cart and system crash (sic). Please improve your ecomm web by not rely (sic) on magento..”

Facebook user Lynn Ong wrote: “After trying so long (sic), I finally got my order too at 2.45am 😔”

Shoppers who hit Uniqlo retail outlets in hopes of making their purchases in person were dismayed to find that there were some before them who had made bulk purchases of tees of the same size.

According to What’s On Weibo, a website which reports on social trends in China, Chinese shoppers had gone “absolutely crazy” over the Uniqlo x KAWS collection. The website was said to have been sold out in seconds. Shoppers created complete mayhem at the Uniqlo outlets. They rushed inside stores the moment shutters were open, picked tees out of piles on the floor and pulled apparel off mannequins.

It is not clear whether the same buzz has generated a knock-on effect in the Singapore market. But one thing is clear: We want our KAWS.

Facebook user Jin Ming Lee wrote at about 1pm on June 3: “Uniqlo should really limit customers to purchase 1 piece per design. I was at 4-5 diff stores for the past 2 hours and I managed to witness customers buying certain designs in bulk quantity.

“There are even individuals listing the tees at resale prices on Carousell while the majority of Singaporeans have yet to secure their piece. I would like Uniqlo to take my suggestion into consideration, as I believe it is definitely selfish to allow bulk resellers to secure all the pieces leaving those who are keen on wearing the tees empty handed.

“In addition, to those resellers, it is indeed your personal choice if you choose to make a profit over the loss of others. It just reflects your greed and lack of dignity.”

She was referring to enterprising sellers who had listed their spoils on Carousell at prices ranging from $30 to $45 a pop. The original price of these tees was $19.90 each.
But not every one was of the same mind. Facebook user Mervyn Heng wrote: “To be honest it’s FCFS (first come, first served), you snooze, you loose. If you really are determined, go like 9am to queue. There were no rules implemented at that point of time hence there’s nothing much Uniqlo could do and the guy wasn’t doing anything wrong too.”

A snaking queue of more than 100 people was seen outside the Uniqlo flagship store at Orchard Central at 5.30pm. Only about 20 shoppers were allowed inside the UT section at any point in time.

Facebook user Marissa Sum expressed concern that the same scenario would repeat itself at the UT Grand Prix 2019 Pokemon launch on June 24. She wrote: “Dear Uniqlo, pls do something about the Pokemon launch happening end of June. Shopping should be an enjoyable and not stressful experience because of inconsiderate and selfish people like the resellers. Hope you can implement a policy to limit the quantity of purchase by then.” In an effort to reduce single-use plastics, from 20 June 2018 onwards, all 84 KFC restaurants nationwide will…
byDanielle Ann 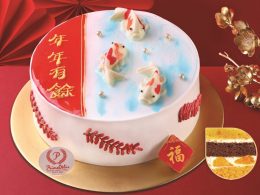 Go on a yoga retreat in Malaysia’s Tanjong Jara Resort with lululemon!