Former teacher who swindled $178,000 out of ex-girlfriend sentenced to jail

For all the single people out there on Valentine’s Day, be glad you weren’t in this type of relationship, and your Valentine’s Day may be lonely, but your savings are quite safe.

Leong Shih Min, 26, had handed over a total of $178,000 to her boyfriend, Gary Won Han Kiat, 35, who only spent the money on gambling. The deception here was that Gary told his ex-girlfriend that he needed the money for business and investments, but he simply gambled all the money away promptly.

A long scam over a two years

Reports said that the money was given over several months during the course of Leong and Gary’s relationship, which subsequently cleaned out the former’s savings and even her mother’s nest egg! Her mother had cashed out her life insurance policy just to acquiesce to her daughter’s request for money at Gary’s behest.

Of course it’s about gambling

Over the course of their 2-year relationship after they met on WeChat in 2015, Gary continuously lied to her, saying that he was a contractor and that he needed money to fund his businesses and investments. The initial amount he asked for was $4,000, which Leong transferred to his bank account, trusting him that he would use it for what he said he intended.

This was all a lie, though, as he immediately purchased $3,950 chips at Resorts World Sentosa to gamble, which he subsequently lost. He asked her again and again while the complainant in the case continued to trust him and gave him the money.

The public prosecutor assigned to case said, “In all instances, the accused deceived the complainant… by stating that he required the sums for his work investments when in reality they were used to fund his gambling habit.

“Around Nov 19, 2015, having dipped into her personal savings to deliver monies to the accused, the complainant then resorted to asking her mother for help when the accused asked for more (cash).”

While the specifics of their breakup weren’t made public, their two-year relationship ended in May 2017 and Leong notified the police of his misdeeds in November of that same year.

Gary had already made reparations worth $12,000, but the public prosecutor is asking for the court to sentence Gary to two years and three months in jail. This is because the deception happened throughout the relationship and that he never intended to use any of the money for the purposes he kept telling Leong about.

The defence argued, on the other hand, that he was remorseful and even gave himself up early in the case proceedings. His initial reparations also show that he had acted in good faith. This is why the defence is asking the courts instead to reduce the sentence to one year and eight months only.

Love and crime do not pay

Gary has posted bail for $20,000 but has to present himself to the State Courts next Monday to start serving whatever sentence the courts decide.

Thanks to the folks from Toy Factory. Rachel and I attended the gala premiere for 881 – The…
byalvinology 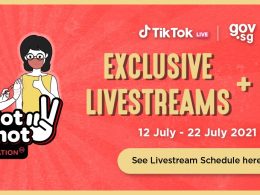 TikTok announces its collaboration with SG Government, under the Ministry of Communications and Information (MCI), to bring the…
byIrone Kim