Winter has come early in Singapore, as we await the conclusion of the critically-acclaimed series Game of Thrones.

The limited-edition collection is now available only at 1855 The Bottle Shop stores or online at AsherBWS in Singapore. The collection is inspired by the iconic characters and the creative world of Westeros and beyond and arrive to tide fans over during their wait for the eighth and final season of the show.

The Game of Thrones Single Malt Scotch Whisky Collection features eight scotches, each paired with one of the iconic Houses of Westeros, as well as the Night’s Watch, giving fans an authentic taste of the Seven Kingdoms and beyond.

House Tully located at Riverrun, rules as the lord of The River lands. The power of water flows through both House Tully and The Singleton Glendullan Select as it is made on the banks of the River Fiddich in the wooded hills of Dufftown. Here they harnessed the water that flowed through the land utilizing a water wheel to power the entire distillery.

House Stark’s resiliency, strength and ability to thrive under the most intense situations are greatly shaped by Winterfell’s frigid temperatures. Dalwhinnie, known for being one of the highest distilleries in all of Scotland, is cold and remote much like The North where House Stark calls home, making the two an iconic pairing.  Extreme conditions are responsible for shaping the signature Dalwhinnie Winter’s Frost honeyed sweetness and spicy warmth. Naturally, it’s best served chilled or over ice.

Lagavulin is one of the most legendary single malt brands and has been crafted on the shores of Islay for more than 200 years – mirroring the meticulous calculation and tenacity employed by the Lannister’s in their rise to conquer the Iron Throne. This single malt whisky is a roaring single malt that recalls the Lannister’s riches and is best served neat or with a single drop of water.

The Oban distillery sits beneath the steep cliff that overlooks the bay in the frontier between the west Highlands and the Islands of Scotland, separating land and sea, just as Castle Black, home of The Night’s Watch, sits between Westeros and the lands beyond The Wall. The liquid’s richness is balanced with a woody, spicy dryness that The Night’s Watch could enjoy even on the coldest of nights.

House Greyjoy rules the Iron Islands and worships the Drowned God. Talisker was a natural pair for House Greyjoy as this single malt is distilled on the shores of the Isle of Skye, one of the most remote and rugged areas of Scotland. The layered flavors and signature maritime character of Talisker Select Reserve are the result of its wave-battered shores. This liquid is an intense smoky single malt Scotch with spicy, powerful and sweet elements combined with maritime flavors.

Royal lineage drives the iconic pairing between House Baratheon and Royal Lochnagar. Similar to Robert Baratheon ruling the Seven Kingdoms upon the Iron Throne, Royal Lochnagar was deemed a whisky worthy of a royal family as it was granted a Royal Warrant after Queen Victoria and Prince Albert visited the distillery in 1848. Balanced with delicate fruits and spices, this taste of royalty is best enjoyed neat.

House Tyrell of Highgarden rules over the Reach, the lush and fertile region of Westeros. Like the Reach, Clynelish is positioned among green pastures and rolling hills, with scenic views of the North Sea. This vibrant, golden Scotch is light and floral, like House Tyrell, and it’s not to be underestimated with its underlying complex combination of Highland and maritime qualities.

The Game of Thrones Single Malt Scotch Collection is new.  Within the collection, there are seven new liquids, not including Royal Lochnagar 12 Year Old, which is currently sold in Singapore. 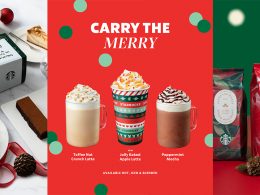 Christmas is near! And what better way to carry the merry than with Starbucks new and returning favorites…
byIrone Kim

Calling all Korean Food Lovers to come together on the K-Food Online Festival and stand a chance to win SGD 5,000 worth of vouchers!

In support of the “stay home” circuit breaker measures, the Embassy of the Republic of Korea is pleased…
byIrone Kim