Taiwanese starlet Cai Qin (蔡琴) is coming back to serenade the audience in Singapore in 2019 with her powerhouse vocals. If you missed her previous concerts here in 2015 and 2017, don’t miss it again this time round.

Her latest tour, titled “经典琴歌”, with a play on the chinese character Qin “琴”, is meant to express classic love songs with Cai Qin’s very own twist to the classics.

The concert will be held in Singapore on 19 Jan, 2019, 8pm, at The Star Theatre, The Star Performing Arts Centre.

I am a big fan of Cai Qin’s iconic silky voice and soulful renditions of her own signature songs as well as covers. I have yet to see her perform live and hence will definitely be there for this upcoming concert. The organisers shared that other than her vocal prowess, the audience can also look forward to her strong stage charm and dazzling outfits.

If Cai Qin’s name doesn’t ring a bell for you, here are a two of her iconic songs which I am sure would be able to jolt the memory for most:

This first song is the iconic tune in the hit Hong Kong movie series, Infernal Affairs, while the latter is a song of goodbye which is often played at farewell settings.

Then, there are her covers of course – which sometimes are often said to bring another flavour to the same songs.

When people think about singers of classic hits, one of the first few names to come to mind would definitely be Cai Qin.

With her passion to bring the best to the audience, Cai Qin always looks into innovative ways to keep the audience engaged in her new concerts, by developing unique concepts in order to deliver the best performance for her beloved fans. Having toured numerous countries including Canada, Malaysia, Australia and China, Cai Qin is finally coming back to Singapore in 2019.

Performing classic hits from 1940 to 2000, some of the songs you can look forward to during this concert would include her classic songs 《你的眼神》,《被遗忘的时光》, as well as Zhou Xuan’s《夜上海》、Wan Fang’s《新不了情》、Zi Wei’s《绿岛小夜曲》and Teresa Teng’s《何日君再来》and《月亮代表我的心》. These songs have been chosen after much deliberation, and she will perform them in her unique way that will definitely astound fans and bring back their memories.

The One and Only – Cai Qin

As her fans often say, “Cai Qin’s performance is truly one that withstands the test of time and can be likened to fine wine.”

Cai Qin’s status is cemented as an evergreen singer, and fans are often enthralled by her voice, from which they can relate to the stories she is bringing out through the songs.

Suitable for audiences of all ages

To be able to serenade the audience with her emotional rendition of the classics, along with her humour and undeniable stage presence, Cai Qin is one of the few stars whose live performance surpasses even that of the music videos.

Her music also has the ability to unify fans, regardless of age, to sing along with her. Her strive for perfection can also be seen when she proclaimed that, “I need to deliver the songs better than the original sings for audiences to remember my version”.

Dedication to performing for her fans

With her meticulousness in ensuring only the best for her fans, along with her numerous years of excellent performances, Cai Qin has truly dedicated her life to performing for her fans.

She once mentioned that she spends the bulk of her time preparing for performances, demanding higher standards of herself. And the reason she is doing all of this, is purely for her fans and the people who appreciate her music, without whom she would be incomplete. All concerts are overseen and the songs handpicked by specially by herself with love, to ensure the highest standards and the best experience for her fans. Whilst she doesn’t deem it as being perfectionistic, Cai Qin is one who definitely gives her all in every
performance.

If you are interested to get tickets to her upcoming concert, details are available below:

Prices above exclude booking fees and handling charges. Tickets are available via sistic or call +65 6348 5555 and at all authorised agent outlets. This concert is organised by CK Star Entertainment.

In a special partnership with CK Star Entertainment, we have 3 pairs of concert tickets to 「经典琴歌」up for grabs! To find out how you can win them. Follow us on our Facebook page or Instagram account if you haven’t done so. In a Facebook post today, a mother named Justina Ong told netizens about her experience with her child…
byStaff Writer 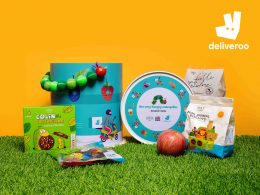 Surprise your kiddos this March school holidays with this limited-edition snack kit and treats available only on Deliveroo!

With the March school holidays just around the corner, Deliveroo teams up with The Very Hungry Caterpillar and…
byIrone Kim