The many sins of Thomas Chua Poh Heng (宝兴)

You may have that one coworker, neighbour, or relative you can’t stand because of questionable morals, actions, and social media posts, but you may not have someone as terrible as Thomas Chua Poh Heng.

In our previous report, he gained notoriety for lambasting a traffic officer who died on duty. (Yes, he posted about a traffic officer’s death on social media). But it seems karma has finally caught up with him, after he decided to do something awful yet again.

Theft and threatening to leak his girlfriend’s sex video

He was caught by police and admitted to criminal intimidation, cheating, and dishonest misappropriation. He also admitted to two other counts of theft, which were committed in separate shoplifting incidents. He was recently sentenced to 18 months in jail.

He’s been caught several times trying to infer items from different stores all over the country. In a report by TODAYonline, he was charged with theft in June last year.

Other reports said that he was caught shoplifting a perfume bottle at Mustafa Centre. He was carrying a 100ml bottle of Must de Cartier perfume worth $98. When security stopped him, he offered to pay for it.

He shoplifted again in a second incident, where he took underwear Spa Bsfit at Festive Hotel in Sentosa.

This Facebook post shows him saying negative comments about the death of Staff Sergeant Nadzrie Bin Matin, who died in a traffic accident on Serangoon Road. The police officer was on duty when an accident claimed his life.

In broken English, we could surmise that he told off police for being intimidating when they all end up dead in the end, just like everyone else.

He followed up with a comment saying that the officer in question had issued him a ticket, and was the reason for his hateful words. Later on, records show that the officer did not issue him any ticket ever, but Thomas does have a string of traffic violations.

Minister K Shanmugam even posted about him below.

For someone who talks so big, you would expect that Thomas should have some reason. Could he be a big-shot executive? A member of parliament? A celebrity?

When the vindictive Singaporean community online could not accept the disrespect, they enacted internet justice–doxxed him from here to his preschool education. They dug up his social media profiles and even a photo of his ID, showing his name, face, birth date and other personal information.

But what was not surprising (but even more upsetting) was that his social media was a lie.

His profile initially said that he was a flight attendant, but Singapore Airlines responded to tags and queries, officially saying that Thomas is not their employee.

Other reports show that he has numerous traffic violations and previous charges, which contributed to his initial stint in a mental health institution last year.

What do you think of Thomas Chua Poh Heng? Let us know in the comments!

Something sweet for Good Friday: Fyi, gay marriage is not legalised in Singapore. It is very brave of…
byalvinology 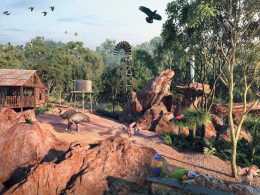 Set to open in the second quarter of 2023, the 17-hectare Bird Paradise will be the first of…
byIrone Kim

omy.sg won a total of three awards this year at the inaugural Asian Digital Media Awards, the most…
byalvinology