Coming back for the 15th year running, the Singapore Heritage Festival organized by the National Heritage Board will be offering a series of activities and events over a span of three weeks, from 6 to 22 April 2018!

The aim of this year’s Singapore Heritage Festival is to encourage Singaporeans to discover the lesser known aspects to our history and to encourage a fresh appreciation of our culture through the programmes. This year, the festival will involve close to 100 community partners and span across 5 key locations – Jurong, Jalan Besar, Chinatown, Bras Basah.Bugis and Toa Payoh.

Among the featured partners is local author Charmaine Leung who wrote a memoir titled “17A Keong Saik Road”. A partner of the event since 2016, Charmaine has been holding guided tours of Keong Saik Road and sharing personal stories of her experiences in the area. This year, she will be rallying fellow heritage enthusiasts in Chinatown to put together a series of performances for the second week of the festival. These programmes range from local film screenings to guided tours around Chinatown for those who call the area home.

Local ‘hawkerpreneurs’ will also serve up local favourites such as putu mayam and fishball noodles during the festival weekends at Jurong and Toa Payoh. One young hawker participating in SHF 2018 is 27-year-old Douglas Ng, who started The Fishball Story based on his love for his grandmother’s handmade fishballs. He has since reinvented the traditional bowl of noodles with special additions such as fried fish skin, and his stall has earned a spot on the Michelin Bib Gourmand Guide. His hawker creations will be available at Jurong Town Hall from 6 to 8 April.

For the first time, the festival will expand into Jalan Besar where a range of quirky businesses have developed. Together with Industry+, a local contemporary furniture brand and producer along Tyrwhitt Road, programmes in the area will include guided architecture tours and food tours as well as the “Big Road Market”, a creative market where local artists, designers and craftsmen can showcase their talents! This weekend focus on the industrial heritage of Jurong and features Jurong Town Hall! Explore the National Monument as you enjoy specially curated programmes inspired by Jurong’s heritage and the communities that grew alongside it, such as Jurong Songbook – an immersive roving performance by theatre group Sweet Tooth that takes visitors through the Jurong story with music, song and storytelling, giving them a chance to interact with characters of Jurong’s past such as a rubber plantation worker and an army soldier. The festival will also be recreating a drive-in cinema reminiscent of Jurong in the 1970s.

Jalan Besar and Chinatown comes to life as our community partners in each area come together to present programmes for SHF 2018. Take part in a street party and shop at a creative market while immersing in the charm of Jalan Besar. Over at Chinatown, uncover the myriad of stories and memories behind the colourful facades of Chinatown’s shophouses through a series of “eat, drink, explore, and be merry” programmes.

At the Arts & Heritage district, Bras Basah.Bugis, watch Armenian Street come to life in a celebration of all things Peranakan with the Armenian Street Party 2.0. The  National Museum of Singapore will feature a new exhibition The More We Get Together: Singapore’s Playgrounds 1930 – 2030. The spotlight will also be shone on Waterloo Street through a theatrical event by Theatre Practice that will explore the rich history of the street. At Toa Payoh’s iconic Dragon Playground, for the first time, the playground will be transformed into a carnival ground featuring a dynamic LED Dragon dance performance celebrating our intangible cultural heritage, outdoor movie screenings, a classic vintage car boot flea, as well as an assortment of popular local hawker delights.

Most of the programmes under SHF 2018 are free and open to the public while online registration for icketed programmes commences 28 March. For more information, visit the SHF’s official website. 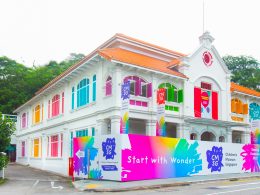 The Singapore Philatelic Museum (SPM) has been repositioned as a children’s museum under the National Heritage Board (NHB).…
byIrone Kim