The closed-door session with Gordon Ramsay was attended by AWWA, ISCOS, Students Care Service, At-Sunrice GlobalChef Academy and the Culinary Institute of America. Ramsay shared his personal experience starting from scratch to becoming one of the most respected chefs today. Gordan Ramsay’s dream is not to become a chef

Known for his impressive kitchen skills and overpowering temper, most people didn’t know the Gordon Ramsay was once an aspiring professional footballer during his younger days. Unfortunately, he suffered an injury that forced him to give up on his dream.

He enrolled back to college and took the hotel management course. It was then when he discovered his natural talent in cooking that allowed him to train with some of the world’s leading chefs, including Albert Roux in London, and Guy Savoy and Joël Robuchon in France.

After opening his own restaurants, Ramsay started to appear on the international screen including his very own hosted show Kitchen Nightmares, Hell’s Kitchen, Hotel Hell and MasterChef US.

Cooking is all about passion

Gordon Ramsay that he cooks because it’s passion. The cooking profession doesn’t pay very well, but his passion led him to become one of the celebrated culinary stars in the world.

“Don’t start cooking because you want to become rich and famous,” is Ramsay’s reminder to all young chefs, “get that knowledge, turn that knowledge into something unique, spend that time studying. A doctor would read medicine for 10 years, a lawyer would read law for 15 years, it’s the same for food.”

“It’s important to go on that journey, travel, study, and don’t worry about comparing where your mates are. As you adapt to life and you change every six months, you get stronger and better.” “When you’re down in the dumps, the most important thing for me, was the journey back. Because picking yourself up and dusting yourself down – no one can ever teach you that in life. More importantly, you need to come back twice as strong. No matter how successful you become, remember that wherever you go in life, it is the journey there that is most exciting.”

“If I can give you one parting advice, it would be to follow your own passion and work for a choice. That won’t come quickly, but persevere, because this is a marathon, not a 100-metre sprint. Break down the marathon into four 10K runs. Do the first 10K, congratulate yourself, and again after the second 10K. Achieve something that’s important to you and give yourself some joy, then the third, and fourth – all of a sudden, you’ve done a marathon.” The on-going ‘In Conversation With’ series in Marina Bay Sands is part of the resort’s corporate social responsibility programme ‘Sands for Singapore.’ The series began in 2015, and already featured award-winning actors, film-makers, musicians, and other celebrated professionals and celebrities around the world. 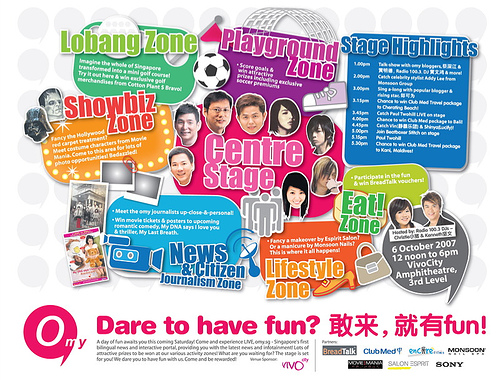 敢来，就有fun! Dare to have fun? [GIVEAWAY] Win a pair of Savour entry passes at the door!

Less than 24 hours to be part of Singapore’s leading food fest! Guess what we are up to today…
byAshleey Leong