Why you should join the Blackmores Sydney Running Festival

Two weekends ago, I completed my first 10km run at the Blackmores Sydney Running Festival. The run was a lot of fun with the beautiful cityscape and the cool weather. We even got to run on the iconic Sydney Harbour Bridge and various public roads, all traffic free. After the run, I am motivated to try out for a 21km half marathon next and maybe even a full marathon eventually if I train hard enough.

Before you brush off this event as an event for just serious runners, note that I am a 37-years-old uncle with a physique which is nothing near say Usain Bolt or Singapore’s own SEA Games Marathon gold medalist, Soh Rui Yong. I have never attempted to run a 10km run before this and usually clock around 30 minutes for a 5km run.

The Blackmores Sydney Running Festival is meant to be a fun run that’s for everyone, including children, the elderlies and those who may not be super fit. The point is – just get out there and enjoy the outdoor!

Yes, there is the competitive side of the run which attracts international elite marathon athletes striving for medals, but there are also international and Australian tourists looking to take part in a spectacular event, charity fundraisers, Sydneysiders looking for a fitness challenge, and families keen for an enjoyable day out.

Upon completing the run, all runners can celebrate their achievements at the Blackmores Recovery Village located near the finish line in the Royal Botanic Garden Sydney with spectacular views over Sydney Harbour and towards the Sydney Harbour Bridge. Here participants can find food and drink stands, massage tents, stage entertainment, and giveaways.

I was given access to the Blackmores VIP reception area and what a delightful experience it was! Free massage, delicious yet healthy food and drinks, gourmet coffee, what more can you ask for after a run!

The Blackmores Sydney Marathon is accessible for first time or leisurely marathon runners pace as the race has a longer course cut-off time of six hours. All Sydney Running Festival participants receive a finisher’s medal and Marathon Runners receive a commemorative finisher T-shirt. Here’s me and my fellow runners from Singapore and Malaysia with our respective finisher medals:

If there’s one overseas run you would like to try, the Sydney Running Festival would be a good choice.

The weather is fantastic. The cool and dry climate means you barely sweat. No sticky clothing and abrasion. You get to enjoy the city view and for those from Singapore like me, you will likely clock a much faster timing than usual if you are used to running in hot and humid conditions.

I took one hour to complete my 10km and I am very happy with the timing as I did not feel tired after the run and was in fact, still feeling energised to run more.

The run did not start out smooth for me.

While you are sleeping, I am off for the 10km #Blackmores bridge run as part of the Blackmores Sydney Running Festival. This will be my first 10km run. Can’t believe how far my weight loss journey has taken me since I started on a clean diet and light exercises a year ago! Thanks @underarmoursg for the new kicks and @blackmoressg for the wellness pack prior to the run. All ready now! #officialbsrf @officialbsrf #sydneyrunningfestival #visitnsw

I fell before the run while walking to the starting line. Yes, that’s how clumsy I am. I spent the night before customising a playlist for the run on the KKBOX app and then forgot to bring my headphones out. So with no music, scrapped knees with blood trickling and a newly bought iPhone 7 with an even newer cracked screen from the fall, I soldiered on and ran the full course with a brave front so as not to look stupid among the other runners.

In the end, it was all good once I started running.

Thank you Under Armour Singapore for the awesome pair of new running shoes which was sent to me two weeks prior to the run for conditioning and Blackmores Singapore for the thoughtful wellness pack, which came packed full of encouraging messages and some health supplements.

More than 33,000 people took part in the event, including almost 2,000 people from 66 countries. A record number of runners tackled the Blackmores Sydney Marathon which, as an IAAF Marathon Gold Label Race, now sits alongside renowned marathons such as New York, Boston and London. Sydney shined as more than 3,670 marathon runners made their way around one of the world’s most picturesque courses – from Milsons Point, over the Sydney Harbour Bridge, through Hyde Park, around Centennial Park, back through the city, to Pyrmont and back around Barangaroo and Circular Quay to the Sydney Opera House.

What is the Sydney Marathon?

In April 2000 a test event for the Sydney 2000 Olympic Games and for the Australian Olympic Marathon team was held. The chance to run over the Sydney Harbour Bridge free of traffic brought out a record marathon field of 4,796 participants. After the Sydney Olympic Games, then CEO of News Limited in Australia John Hartigan and the CEO of Athletics Australia proposed a legacy event to the New South Wales Government and were granted the rights to own and organise the Sydney Marathon.

The Blackmores Sydney Running Festival was born in 2001 with 1,600 marathoners and 6,400 10km runners following the course of the official Olympic Marathon course.

How the event has evolved?

Since the inaugural event, the Festival has evolved to incorporate a Half Marathon, a 10k run and Family Fun to provide opportunities for people of all ages and abilities to run over the Sydney Harbour Bridge free of traffic.

The Blackmores Sydney Marathon, as part of the Blackmores Sydney Running Festival, was the first Australian domestic marathon to be broadcast live in 23 years thanks to a partnership with New South Wales Government’s Tourism and Major Events Agency, Destination New South Wales. The three-hour live broadcast is shown nationally on Network Ten in Australia and internationally on Eurosport Asia, Fuji TV Japan and free to air television in China. 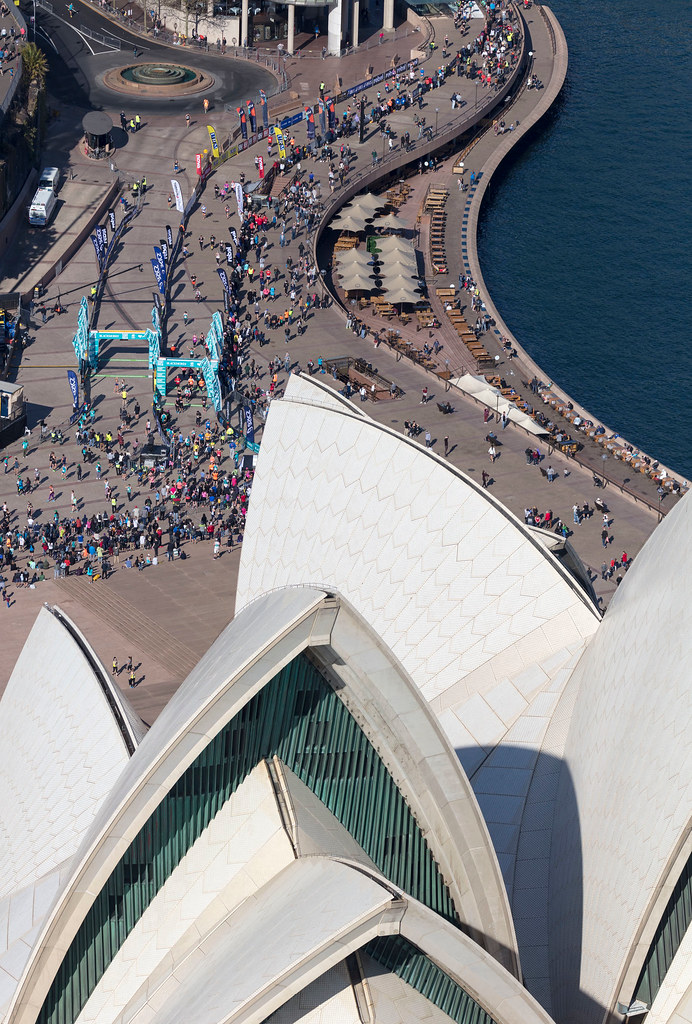 In 2016 the Blackmores Sydney Running Festival partnered with the Guinness World Records, to set records for fastest costumed runners. Four records were set including Howard Dawson’s record for fastest marathon dressed as a food supplement (male) at 3 hours, 3 minutes and 52 seconds. The partnership, and the fun, continued in this year’s race. 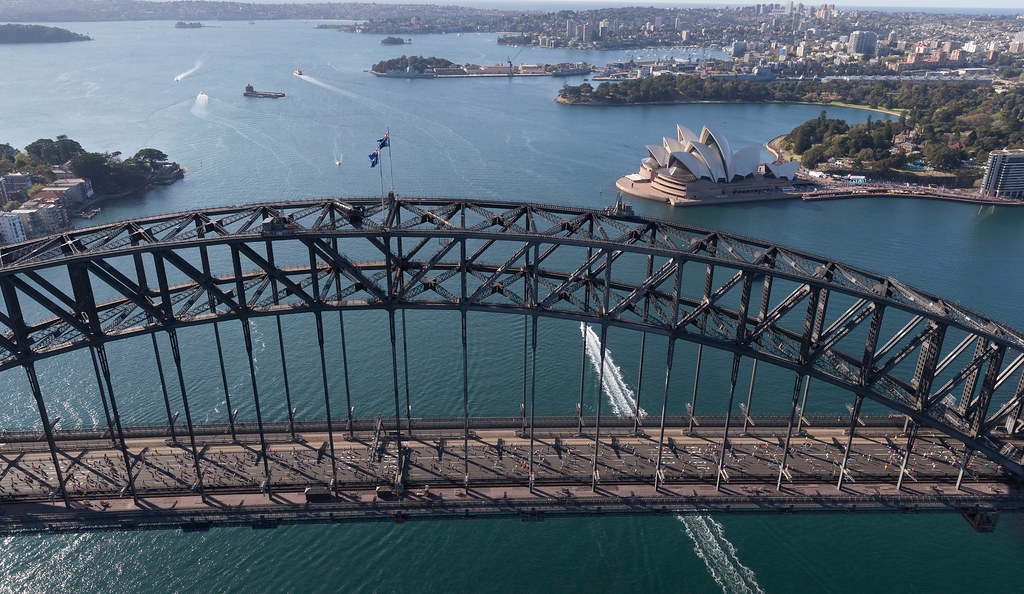 What are the top reasons to go to the Blackmores Sydney Running Festival?

The Blackmores Sydney Running Festival is the largest running festival in Australia and is the only event when runners can cross the Sydney Harbour Bridge free of traffic.

The Sydney Running Festival is unique as the course passes spectacular Sydney sights including the Sydney Harbour Bridge, Royal Botanic Garden Sydney before finishing at the world-renowned Sydney Opera House. The Blackmores Sydney Running Festival is staged in early Spring when the weather is cool but pleasant and sunny and perfect conditions are great for running, walking and sightseeing.

The Blackmores Sydney Running Festival has a run for runners of all ages and experience with marathon, half marathon, 10km and 3.5km distances available.

I will be back again and I hope you will join me too next time! 🙂 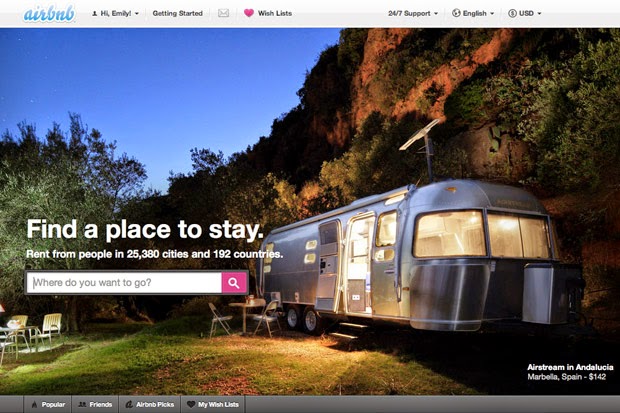 The team from the world-class musical, Evita, is coming to The Mastercard Theatre at Marina Bay Sands this…
byDanielle Ann

Express street and pop art and turn on positive vibes for the hottest seasons of the year: Swatch…
byIrone Kim