Seen via EDMW forum. A bunch of four kids are caught on camera playing a fool on a high-rise condominium ledge, sitting and chit-chatting casually, risking their lives if they were to slip and fall. The video was said to be taken in Singapore.

One of the kid appears to be in school uniform, with white socks and shoes, yellow top and blue shorts.

Forummers were quick to identify the condominium to be Riversound Residence at 1 Sengkang East Ave, Singapore 544811. This was done via an image comparison:

How did the kids even get to the ledge?

This seems to be due to a design flaw which allows residents to easily access the ledge, as explained by a Lai Mei Fonh who claimed to be the owner at one of the unit at Riversound Residence: 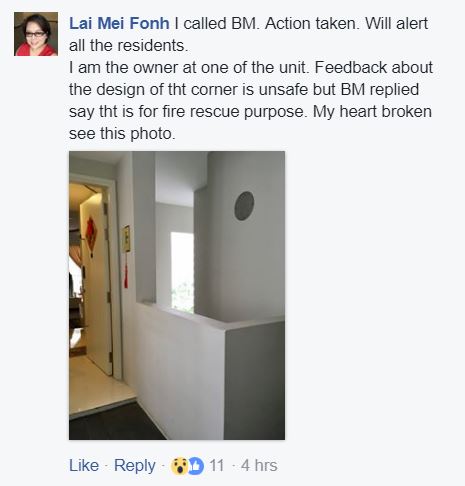 Riversound Residence is a 590 residential units condominium development in Singapore that is build by Qingjian Realty, a china conglomerate with businesses covering domestic and international contracting and investment, real estate development, capital management and logistics. The group had a turnover of RMB 45.8 billion (SGD 9.2 billion) in 2013 and had developed significant landmarks in China such as the Olympic Sailing Centre, Liuting International Airport and Qingdao International Conference Centre.

The condo management has yet to reply officially if the video was indeed taken at Riversound Residence. Neither have the kids been identified.

Whose fault is it that the kids are playing on the ledge? Should it fall on the parents who failed to supervise the kids? Or the condo management/ developer because of the alleged design flaws?

5 gems to look out for on the 8world.com site

If you’re a Chinese reader and grew up watching the news on Mediacorp Channel 8 8频道, you will…
byRachel Chan

K11 MUSEA, located in the heart of Hong Kong’s Victoria Dockside, opens its doors to the public. With…
byIrone Kim

This is a bonanza you’d want to be a part of! This nostalgic wine restaurant is located along…
byStaff Writer
Hello. Add your message here.
See how Snapask has been helping out over 3 million students around the world. Find a perfect plan