Remember those tiny LEGO®Bricks you used to play with?

Don’t belittle these seemingly little pieces. When you piece them together, there is boundless room for creativity and imagination.

Step into PIECE OF PEACE Word Tour exhibition, the first-ever in Singapore and you will know exactly what we mean. Hwaseong Fortress in South Korea was inscribed as an UNESCO World Heritage Site in 1997. It is featured as one of the installations for LOVE EARTH, LOVE ASIA series.

The PIECE OF PEACE World Tour begins its first leg in ASEAN in Singapore and it will not return so you better hurry if you would like to see for yourself the wondrous exhibits.

Originated in Japan, this UNESCO World Heritage Art Exhibition has attracted over 2.9 million participants in Japan and around the world. As you would have guessed it, all the exhibits here are made with LEGO®Bricks. This reproduction of the famous historic site in Rome, Italy, Colosseum consists of an astounding number of 7, 000 LEGO®Bricks. While you may not have imagined such a majestic ancient relic to be replicated in LEGO® form, this art piece will definitely have you floored. Itsukushima Shrine is one of the most revered landmarks in Hatsukaichi, Japan and you will be to see the replica at the world tour.

The not-to-be-missed exhibition highlights are LOVE EARTH, LOVE ASIA; and LOVE ASEAN, all of which are featuring LEGO® replicas of UNESCO World Heritage Sites. In commemoration of ASEAN’s 50th anniversary, seven new replicas of ASEAN’s heritage sites will also be displayed at the exhibition. The wide spectrum of colours in this eye-popping exhibit surely catches your attention. It is hard not to be captured by these vivid colours of the houses found in the world’s leading silver-extraction centre in the 18th century.

Since 1988, this vibrant town was inscribed as a UNESCO World Heritage Site. The replica of this town reminiscent of Baroque and neoclassical buildings was made in 12 days with 10, 000LEGO® bricks.

In one seating, you can expect to see exquisite replicas of Greece’s Acropolis of Athens; Australia’s Sydney Opera House; Japan’s Itsukushima Shinto Shrine and South Korea’s Hwaseong Fortress and many more.

As part of the iconic LEGO® Build Amazing Campaign, the Singapore edition of the world tour is set to inspire young children in their pursuit of creativity. Undoubtedly, creativity is an element integral to the future potential of success of our future leaders – who are children today. Interesting replica of McDonald’s in Singapore.

Participants also get to reserve the final piece (Nyonya Kueh) of the set of five LEGO® Singapore Limited Edition Food Culture Mini-Builds, which celebrate Singapore’s iconic food culture. Simply spend a minimum of S$40 on tickets and S$80 on LEGO® products in a single receipt. The set consists of five exclusive mini-builds, including LEGO® replicas of Singapore’s beloved food cart, such as national dishes chilli crab and nyonya kuehs. There is of course, the quintessential and traditional kaya toast breakfast set every Singaporean remembers fondly of as well as our truly unique hawker centre ‘chope’ practice. Collect all five and get a free exclusive Singapore Food Culture base to display the city’s favourite eats. While stocks last. For more information, please visit here.

There’s plenty to see for yourself at this one-in-a-lifetime PIECE OF PEACE World Tour in Singapore and you will certainly have a ball of time just admiring these amazing LEGO® works. 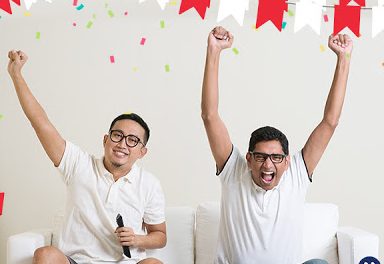