Celebrity moms Jaime Teo and Jamie Yeo have more than just the pronunciation of their names in common.

Here are some similarities between the ladies.

17 April 1977: Both Teo and Yeo share the same birth date and year, and were born in the same hospital.

Ngee Ann Polytechnic: Yeo studied Mass Communications and while Teo did Computer Studies. Both were enrolled at the same time and graduated in 1998.

Celebrities: Yeo began her road to stardom as an actress portraying Tammy in the local English TV drama Growing up. She left acting in 2002 for a career in radio. She is also known for hosting sports shows on ESPN and is now a radio DJ for MediaCorp Gold 90.5FM. As for Teo, following her success as the winner of Miss Singapore Universe pageant in 2001, she went into acting, hosting and even singing. She was once part of One Fifth, a Singapore-Taiwan girl group, she said in an interview with women’s magazine Her World. She was also one half of popular cupcake shop Twelve Cupcakes, which was sold to a tea producer for S$2.5 million.

Formerly married to Radio DJs: Yeo was married to local radio DJ Glenn Ong in 2004 before splitting up in 2009. Former beauty queen Teo was married to ex-radio DJ Daniel Ong for 11 years, before they announced the split in 2016. 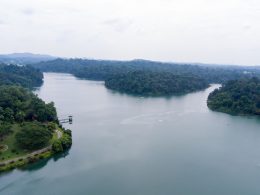 Just like other 14-year-olds, Richard Goh and Soo Xiang Lin were easily swayed by online accounts of the…
byDanielle Ann

Fly for as low as S$8! AirAsia runs 18th Anniversary promotion from today till 1 December – don’t miss it!

AirAsia is celebrating its 18th birthday with a special anniversary promotion. To celebrate the milestone, AirAsia is offering…
byIrone Kim