Bandung, the hilltop get away and fashion Mecca for residents of Jakarta has long been a popular destination for its cool climate and trending fashions. On top of that, the relatively new highway cut what used to be a 5 hour journey to less than half that time. Referred to as Parijs van Java (the Paris of Java ) by the Dutch elite for its collection of luxurious hotels, restaurants, cafes and boutiques that catered to wealthy plantation owners, the city on the summit has preserved that same air of romanticism alongside its colonial architectural heritage. For women on a mission, cut through all that misty eyed reminiscence and sentiment. Make a beeline to one of the many “factory outlets” which, are where factory overruns of genuine goods are sold for pennies on the dollar of regular priced items. There are around 20 or 30 factory outlet shops around town, mostly in the Dago, Sukajadi, Jl. Riau, and Dr. Otten areas. Big signs on the side of the road give directions to many of the shops, of which some of the more popular establishments are: As a bustling hilltop city with a youthful population, the next thing after fashion is food. There is a growing café culture to cater to leisure seeking weekenders from the Mega city capital and carefree undergraduates from the tertiary institutions in Bandung.

Armor Coffee coffee, located in the lush hills outside Bandung, is the perfect place to while away an afternoon amongst pretty woodland surroundings. The coffee itself is manually pressed from 100% Indonesian beans and has a thick, satisfying flavour. Aside from the manual press, customers can choose from 3 other methods: french press, V60 and mocka pot. The other great thing apart from location and quality is the price. Coffee starts at Rp 10k and food is priced from Rp 15k. The Cireng (fried tapioca starch with assorted filling) and Goreng Pisang (fried banana slices) are especially delicious. Dusun Bambu, another picturesque destination that manages to meld quirky and trendy into a single physical form puts together sculpted gardens, whacky dining pods in a grove of tall skinny trees and pitched roof huts around a large pond. The restaurant serves local and western fare with a flair. What most like about the place and, indeed about all of Bandung in general, is the laid back atmosphere. Lounge in covered and padded platforms as you pick food languidly off the plates beside you and stare at the wide open vistas before you. As with most places in Indonesia, one is never far away from awe-inspiring natural sites. A mere 50km South of Bandung city is Kawah Putih ( White Crater). The volcanic origins of this attraction is immediately palpable, from the heavy smell of sulphur to the verdigris green tint to the lake. Weekends see crowds at the banks of the acidic lake, so visit on weekdays for the best pictures. 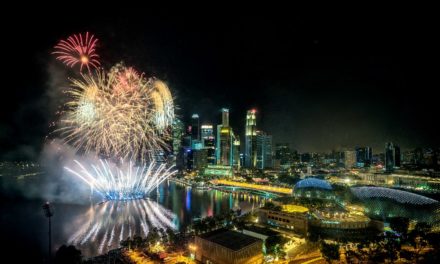