Is this a cockroach or the eyes and feelers of a soft-shell crab?

Look at this picture and tell us whether you see a cockroach or just the eyes and feelers of a soft-shell crab? A Singapore blogger, Eugenia Koh (@pinkyniakoh), is engaged in an online spat with a ramen restaurant chain, Ippudo Singapore over this picture.

Koh claims that she sees a cockroach while Ippudo claims they see the eyes and feelers of the soft-shell crab.

Their exchange is documented as below: 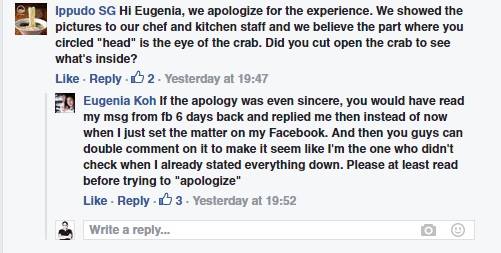 We will never know because for some inexplicable reason, Koh’s brave boyfriend chose to gobble up the contentious piece of evidence even though the couple suspect there is a fried cockroach stuck to the crab. He complained of a strange aftertaste, but did not suffer any ill effects after consuming the dubious piece of crab.

What’s left for the two parties to argue till Kingdom come is the single picture which Koh took of the dish.

As an aftermath, to protect the restaurant chain’s reputation, Ippudo posted an announcement on their Facebook page, saying that they “will take a stand when food bloggers try to blackmail us with false accusations”:

What is the lesson learned here boys and girls?

If a dish you ordered appears suspicious, check with the restaurant staff on the spot instead of taking a photo, proceed to eat up everything and then cry foul after that.

Look at the picture again and help Koh and Ippudo settle this once and for all. Do you see a cockroach or the eyes and feelers of a soft-shell crab?

Want to go out but scared? Here are fun things you can do at home to help kill boredom

In this difficult time, it is better to stay at home than expose yourself to the ongoing pandemic.…
byIrone Kim

Fancy a drink as refreshing and Instagram-worthy bright pops of colour, fruity flavours and printed accessories? These are…
byIrone Kim

Odette in Singapore is No. 1 at Asia’s 50 Best Restaurants 2019 Awards

The 2019 list of Asia’s 50 Best Restaurants were announced at an awards ceremony at Wynn Palace, Macao…
byIrone Kim