Here’s a fun way to get junior interested in robotics – adopt an interactive robot for the family. And the best part – you can build it one part at a time, over the course of 70 magazine issues!

Our family was thrilled to get acquainted with Robi, a robot touted to be the best-selling humanoid robot worldwide. “I am Robi. I am a robot with many pieces and can do many things!” it told us when we took him out of the box. A fusion of design and Japanese technology, Robi is designed to provide interactive companionship with the entire family. He came to us assembled for the purposes of this blog article.

Robi will be making his debut on July 9, at a roadshow in Marina Square Shopping Mall. Professor Tomotaka Takahashi, the creator of Robi, and Yujin Kimura, consumer robotics manager, will be there to introduce the lively Robi to visitors. There will even be a special performance featuring 100 Robi robots in a synchronised dance. Families can get handsy with Robi at interactive stations.

He can communicate with users, expressing emotion through the colour of its eyes. When it was here, its eyes were mostly orange, conveying what I believe is happiness? He told us quite often that he was tired, though, and would sit himself down automatically after declaring so. Too cute! I’ve been told that the specially designed Singapore version of Robi has been programmed to speak some Singlish phrases, as well as English and Chinese.

You can’t buy Robi pre-assembled, however. To ensure that you have an in-depth understanding of how Robi works, he is delivered part by part over the course of 70 issues of educational magazines, along with instructions and model parts. Like this, you can look forward to assembling Robi from scratch with your own hands. Robi is suitable for those aged six and up.

Robi retails at $28.90 per issue and is available at selected supermarkets, convenience stores, bookstores, and newsstands from July 5 onwards. The first issue will be available at the promotional price of $9.90. Customers who subscribe online at www.robi.sg will also have a promotional discount.

One last highlight to wow you over – watch Robi dance!

“Start the music!” That’s what #Robi says just before he starts playing music and grooving away. Asher never tires of watching #Robi’s antics. Come and be fascinated by #sgrobi at a roadshow happening in Marina Square Shopping Mall from July 8 to 10. Organised by @Robi_Singapore 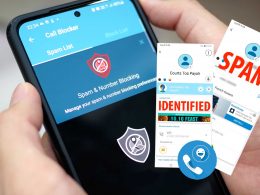 Prevent Caller ID Spoofing, Spam and Scam Calls all with this One FREE App

Sick and tired of spam and scam calls that you are unable to identify and block? CallApp, a…
byalvinology Taiwan’s famous fried chicken brand Monga is opening its first-ever outlet at Jurong East Mall in Singapore this…
byIrone Kim
Power up your child's learning with Geniebook.
Sign up for free demo
This is default text for notification bar
Learn more