Why we should not support Lee Wei Ling

I wrote a post previously on why we should support Lee Wei Ling in her public spat against various past and present editors at Singapore Press Holdings (SPH), for allegedly gagging her rights to write what she wants in her columns with The Straits Times.

Well, the saga has since ballooned, with her brother, Lee Hsien Loong, the Prime Minister of Singapore drawn in too. For fairness and in view of recent developments to the saga, here are five reasons why we should NOT support Lee Wei Ling:

She has been accused of plagarism

An associate editor at the Straits Times, Ivan Fernandez, wrote an article to refute Lee Wei Ling’s accusations of censorship and had accused her of plagarism in her writings. Fernandez was the editor who worked on Dr Lee Wei Ling’s columns.

Plagiarism is a very serious no-no in journalism. Thus far, Lee Wei Ling had not refuted that she did lift some of the text in her article. She had tried to explain it away as unintentional and that Fernandez did not point it out to her either during their multiple email correspondences throughout the editing process. The prime minister of Singapore essentially called her a liar

Her brother did not call her a liar directly, but put it across in a nicer way in a public Facebook post: The swords are drawn between the Lee siblings.

She allegedly misquoted a friend and put words into his mouth

Janadas Devan, the Chief of Government Communications in Singapore, had publicly disputed Lee Wei Ling’s account of a series of conversations between them. In an article in TODAY, the 61-year-old senior government official said that what Lee wrote about her amounted to “a serious allegation about my conduct in my previous occupation”. Devan worked for the Straits Times previously and was one of the editors who edited Lee Wei Ling’s columns.

Here are his rebuttals: 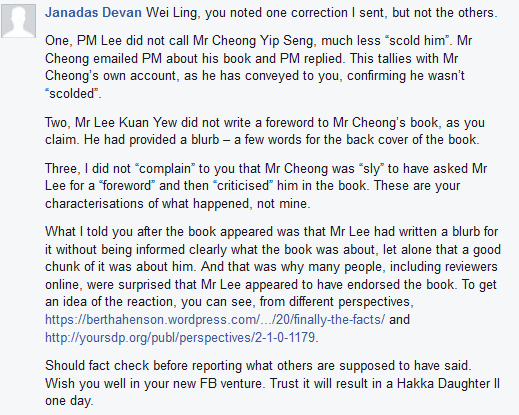 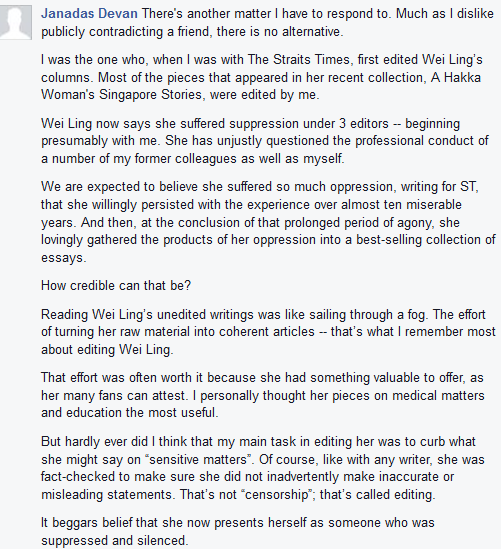 She only advocates free speech in Singapore after it affected her

Lee Wei Ling only started speaking up for free speech after she deemed herself to be “gagged” by SPH and the “powers that be”. Where was she when other ordinary Singaporeans complained of the climate of fear in Singapore with regard to freedom of speech?

End of the day, Lee Wei Ling’s main grouse seems to be with regard to how to honour her late father. She deems herself to be at odds with what was being done by her brother, the prime minister, and the Singapore government, during the one year death anniversary of Lee Kuan Yew. It is very much a family affair that should really be sorted out at the dining table at the Lee family’s home, rather than aired publicly.

Hopefully, the siblings would be able to sort things out amicably at home after all these. If not, the show goes on for the public to be entertained and amused.

This is getting better than that Hong Kong television drama, Heart of Greed (溏心風暴)!

I can’t wait for the next episode. Happy ending? Or there is going to be part 2, part 3 and more? La Braceria Pizza & Grill is an italian family-style restaurant situated in the Bukit Timah area. If you…
byalvinology

Love knows no boundaries! A 23-year-old Chinese guy marries a bride whose age is only one year younger…
byIrone Kim