MasterCard has revealed that one in three millennials (18-29 years old) in Asia Pacific are eating at fine dining establishments at least once a month, more so than those 30 years old and above.

No wonder so many of the top blogs and content sites in Singapore are all food-related!

The most frequent fine-diners in Asia Pacific are millennials from China – on average visiting more expensive establishments two or three times a month. This is higher than the average for millennials across the region and higher than any other age group.

This is despite the fact that more than a third of millennials (36 percent) post comments and reviews of their dining experiences online. This is especially true of Chinese (61 percent) and Thai (52 percent) millennials, where more than half of the young people polled regularly post reviews after a meal.

Beyond millennials, people in Thailand (39 percent) and China (30 percent) are also the most likely to spend more on dining over the next six months with around one in three indicating they plan to eat at more expensive establishments.

But while consumers may be enjoying fine dining, they are still cost conscious. Sixty-four percent of consumers in Asia Pacific regularly check for discounts or dining deals from coupon websites, mobile applications or credit card promotions. Sixty-eight percent of millennials regularly look out for deals before choosing a place to eat.

If you are looking for something to help you save money on dining, consider getting the Entertainer Singapore 2016 app. It contains more than 500 1-for-1 deals across F&B, attractions and spas. Get the 2016 app at S$10 off the regular price when you use the discount code “2016BLOG”. I have been using this app for many years and it is the secret as to how I can afford to keep eating at restaurants all the time. 🙂

Dinner at Kaiserhaus, featuring cuisines from the Habsberg Empire (1848-1916). Tried their Bohemian Meat Dumplings and Viennese Crispy Chicken. Good stuff and there’s 1 for 1 main course with the #the_entertainer241 app! #foodporn

Back to the survey by MasterCard, here are some detailed findings:

The results are based on interviews that took place between between May and June 2015 with 8,698 individuals (18 to 64 years-old) across 17 markets in Asia Pacific.

If only every Tuesday is Free Cone Day with Ben & Jerry’s, life’d be perfect for anyone with…
byCarrie Er 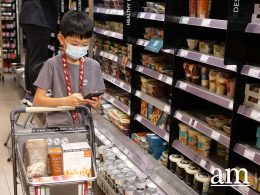 Samsung is going all out to offer the lowest prices, best discount in town and yet, top-quality electronics…
byIrone Kim

Usher in the Lunar New Year with fun activities and awesome prizes at Jurong Point! From now till…
byIrone Kim