Such a let down

The queue to enter the Taj Mahal was growing by the minute.

We were the first in line, having arrived about an hour before the gates opened at 6am.

In the chilly pre-dawn air, the anticipation was building.

Finally, the gates opened and my friends and I raced into the inner compound.

For a couple of minutes, we had the Taj Mahal all to ourselves.

And I guess it was supposed to be a magical moment.

Not that it wasn’t nice.

And I didn’t grow to love it in the two to three hours we spent there.

I mean, it’s a very beautiful structure and I’ve read the touching back story.

Its symmetry made for some lovely pictures but it’s not something I would rave about to friends back home.

Instead, I found it rather lifeless, and it was more a case of “struck this place off my list of places to visit”.

Or maybe the antipation was so huge there was no way the Taj Mahal could live up to it.

But the blue city of Jodhpur, that’s another story.

It’s not exactly off the beaten track either, but I loved its beating, pounding heart.

The chaos, the sounds and even the dirt was intoxicating.

I loved wondering around its winding streets and finding surprises at every moment – a lively and colourful bazaar here, a wonderful cup of lassi there.

And I loved the majestic Mehrangarh Fort overlooking the entire city.

And yet, the Taj Mahal grabs all the attention.

In fact, one of my colleagues had a spare day in Delhi after a work trip, and what did she do?

She booked a car to bring her to the Taj Mahal and back in a very long day trip.

Which brings me to the point that travel is a very personal endeavour and whatever rocks your boat might not be something that other people fancy.

And which is why, when you’re travelling with friends, your experiences can vastly differ.

He or she might be raving about a place which you find so-so, while they could think you’re nuts for liking something else.

I found it pricey and overrated, though perhaps I was put off more by the prices.

Instead of enjoying the place, I found myself watching my pennies and pounds dwindling by the minute.

And while places like the Tower Bridge and Big Ben were quite impressive, they did not connect with me on a deeper level.

I found them more like a series of photo stops instead.

But I loved Pristina in Kosovo (yes, the word that comes to mind when one thinks of Kosovo is probably war and not tourism).

it’s not the most beautiful city.

In fact, some parts of it are downright ugly.

And it’s also one of the poorest countries in Europe.

But the people were amazingly friendly.

I met people who stopped me on the streets and created photo opportunities for me even though there was a language barrier.

For instance, there was a fruit seller who ushered me in front of his fruit stall so he could take a picture of me with his fruits.

And it’s not like he asked for a tip afterwards.

He merely smiled and wished me luck.

And there was a Chinese lady who invited me to her shop for a cup of coffee when she spotted me, an ethnic Chinese, on the streets.

Likewise, she asked for nothing.

In fact, she treated me to that cup of coffee.

And these are the experiences I’ll remember long after the trip.

So have you been disappointed by destinations?

If so, which are they and why? 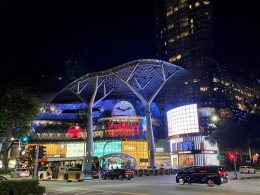 With the opening of The Batman on the big screen set for 3 March, WarnerMedia partners Singapore Tourism…
byIrone Kim

Makeover your bathroom with Grohe

I quite like my bathroom, I really do. I like the bay windows which serve no real function…
byRachel Chan