If you love travelling, chances are you’d have thought of becoming an expatriate in another country.

But is it all it’s really cracked up to be?

I worked in Tianjin, China for two years.

There was no language barrier, but everything else about the place was unfamiliar – the food, the culture and the weather.

And it was exciting initially.

I mean, it’s the ultimate trip.

Unlike a touch-and-go trip, you’ll have time to see beyond the surface of the city.

The unknown streets will start to get more familiar.

You will know where to go when you need to get something done.

Heck, you can even give directions to strangers if push comes to shove.

You’ll also make friends with locals who will tell and show you more about the city than a tour guide ever could.

But the excitement will wear out soon.

There are only so many times you can visit the same tourist attractions.

And when you’ve ticked them off your list, what do you do?

Well, by then the vacation part of the big move is probably over.

Not that it’s a bad thing.

You know, stuff like paying the bills and actually having to work to pay the bills.

You might also have to deal with bouts of loneliness and being away from your friends and loved ones.

Some people deal with it better than others, but part of it also depends on their reasons for moving.

I know of some people who relocate, but never really move.

They hang out with their compatriots.

Their kids go to the same international schools.

They live in a gated community for expatriates.

To me, however, if I’m moving, I want to be integrated into the local community.

It will take some time, but the rewards are immense.

You’ll gain fresh insights into another culture and way-of-life.

And perhaps that’s even more rewarding than the usual sightseeing trips which most of us end up going on.

But hey, to each his own.

So to me, while living overseas isn’t exactly a big extended vacation, it is most definitely an interesting and exciting chapter of your life.

And I did take the opportunity to explore Tianjin and the rest of China while I was there.

So have you thought about relocating overseas?

And if you have moved, how was the experience? 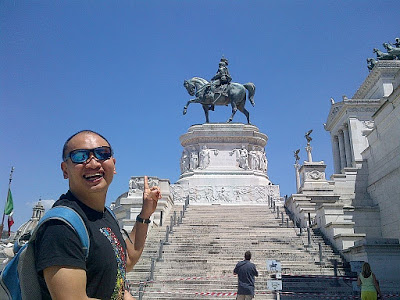 Rome. Roma. The eternal city and indeed one of the most popular tourist destinations in all of Europe.…
byAlex Liang