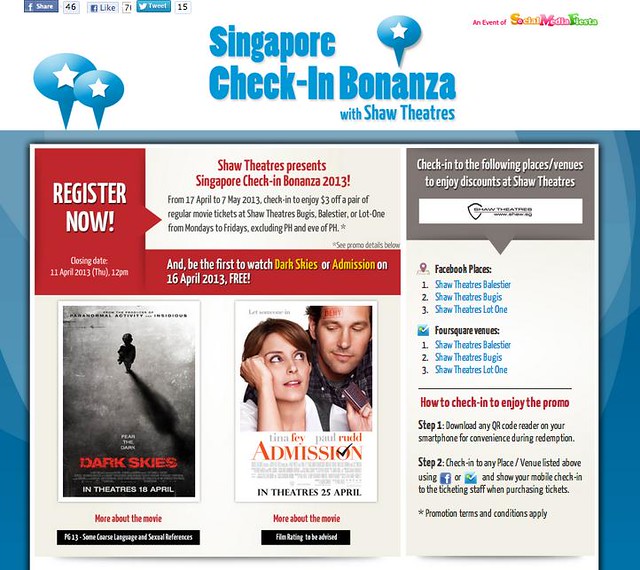 In conjunction with the World Foursquare Day on 16 April, omy.sg launched the second Singapore Check-In Bonanza with Shaw Theatres from now till 7 May 2013.

On 16 April itself, Shaw Theatres and omy.sg will be treating cinema goers to over 100 pairs of tickets to catch either Dark Skies (in cinemas 18 April) or Admission (in cinemas 25 April), two new movies coming soon to Singapore cinemas.

Two hundred lucky individuals will get to watch either movie for free at the preview screening on 16 April, even before either movie is officially released.

To get the free tickets, simply register yourself on the official Singapore Check-In Bonanza site and “check-in” at Shaw Theatres on 16 April if you are among the lucky few selected via a random draw.

In addition, from 17 April to 7 May, everyone can enjoy $3 off a pair of regular movie tickets at Shaw Theatres Bugis, Balestier or Lot-One, simply by “checking-in” at the respective Shaw Theatres on Facebook and/or Foursquare* (please refer to Terms & Conditions).

Janet Ong, Digital/ Social Media Strategist, omy.sg, said: “Checking-in” via location based apps has become a habit for plenty of smartphone users, and omy.sg initiated the Check-InBonanza as an opportunity to celebrate this action which has become second nature to many of us. However, here’s our spin, don’t just check-in. Get rewarded for it! By providing check-inincentives, the Check-In Bonanza aims to encourage social media savvy folks to explore special deals at various locations, while also getting more users to engage in check-inactivities. This creates a win-win situation that benefits both users and our event partners, with the former enjoying exclusive check-in deals and the latter getting greater brand awareness.”

Organised by omy.sg, Singapore Press Holdings’ leading bilingual news and entertainment portal, the Check-In Bonanza is an expansion from the Singapore Foursquare Day which omy.sg organised in 2011. The event rides on the growing popularity of location based applications on social media sites like Facebook and Foursquare that allow users to “check-in” at venues they are at to share with their friends.

Following the footsteps of the successful Singapore Blog Awards, the Check-In Bonanza is an annual local social media check-inevent that Singaporeans can look forward to every year.

Monster Jam, the thrilling live motorsport event, is zooming back to Singapore’s National Stadium for a one night…
byIrone Kim 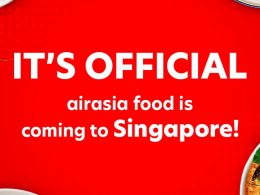 If you receive these two advertisement hangers outside your door? Which organisation would you volunteer with? Don’t worry,…
byContributor