On my third day in Resorts World Manila (RWM), we checked out early from Remington Hotel and shifted to Maxims Hotel.

I could not wait to move into the suite at Maxims. Once I have checked in, I spend over an hour lazing around in the room, busking in the comfort of the cosy sheets and exquisite bathroom.

As there’s free Wi-Fi, I promptly set up my workstation and replied a few work emails while chatting with my wife online.

I intended to take a short nap initially, but I got so carried away exploring and enjoying the suite that it was already lunch time by the time I wanted to lie down to sleep.

Lunch was an international buffet hosted at the Genting Club. It was a casual affair with everyone busy mingling and getting to know each other.

As we will be headed out for the rest of the day, I did not ate much for lunch as I wanted to save some stomach space to try some regular pinoy food.

After lunch, we set off on a city tour for sight-seeing in the earlier part of the day and shopping in the evening.

Our first stop was at the historic Rizal Park, where the remains of the country’s national hero, Dr José Rizal lies within the cornerstone of Rizal Monument. Considered one of the largest park in Southeast Asia, it has an area of 58 hectares which runs from Taft Avenue up to the walls of Manila Bay.

Since the Spanish Colonial Era, the park has been a favorite spot for unwinding, socializing, an urban oasis for family picnics on Sundays and holidays. It is one of the major tourist attractions of Manila.

Rizal Park has been the site of some of the most significant moments in Philippine history. The execution of pacifist Dr José Rizal on December 30, 1896, sparked the fire of the Philippine Revolution against the Spanish colonizers, elevating the martyr as the national hero of the country. The Declaration of Philippine Independence from American rule was held here on July 4, 1946 as well as the political rallies of Ferdinand Marcos and Corazon Aquino in 1986 that led to the EDSA Revolution deposing the dictator.

José Protacio Rizal Mercado y Alonso Realonda (June 19, 1861 – December 30, 1896, Bagumbayan), was a Filipino polymath, patriot and the most prominent advocate for reform in the Philippines during the Spanish colonial era.

As a political figure, José Rizal was a proponent of achieving Philippine self-government peacefully through institutional reform rather than through violent revolution, although he would support “violent means” as a last resort. Rizal believed that the only justification for national liberation and self-government is the restoration of the dignity of the people, saying “Why independence, if the slaves of today will be the tyrants of tomorrow?” (I love this quote) The general consensus among Rizal scholars is that his execution by the Spanish helped to bring about the Philippine Revolution.

There were two consecutive wedding taking place when we arrived and we got to soak into the atmosphere. We then did a quick tour of a museum housing religious and secular art, located within the church premises.

After the church, we visited Fort Santiago, which served as the headquarters of the Spanish, American and Japanese colonisers during more troubled time.

The fort is one of the most important historical sites in Manila. Several lives were lost in its prisons during the Spanish Colonial Period and World War II. José Rizal was imprisoned here before his execution in 1896. The Rizal Shrine museum displays memorabilia of the hero in their collection and the fort features, embedded onto the ground in bronze, his footsteps representing his final walk from his cell to the location of the actual execution.

For shopping in the evening, we headed to SM Mall of Asia, owned and developed by SM Prime Holdings, the largest mall developer and owner in the Philippines.

There was no way one could finish explore the whole mall in a single day, not to mention within the span of a few hours.

Hence I had to shop strategically, making a mental checklist of stuff I wanted to buy while walking briskly to cover as much of the mall as possible to get an overview.

In this way, I managed to get all the stuff I needed and was very happy with my purchases. I also managed to try some pinoy food at the food court, though they were not really palatable with my taste buds.

Since this was our last night in the Philippines, the Singapore group had our dinner together at Manila Bay, bonding over fresh seafood, al fresco entertainment and beer.

The dinner was a perfect ending to a great trip at Resorts World Manila.

When we got back to our hotel suites in Maxims, I took a relaxing dip in the bathtub with the bath salt provided.

I had a really good sleep that night. We will all be flying home the next day and I really wish I had a few more days to laze around and do nothing, lapping in the comfort of the Maxims Suite. 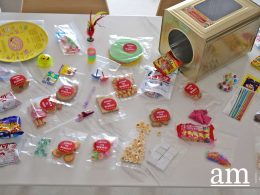 For the month of September, Kopitiam and Foodfare are inviting everyone to celebrate good ol’ days by indulging…
byalvinology 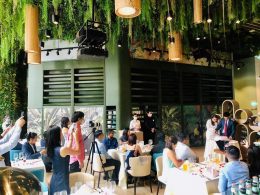 Celebrate Things Your Way At Nalati

After a long year under extraordinary circumstances, it’s finally the season for us to cut back and relax.…
byalvinology

While it’s not advisable to travel to America now due to the developing Covid-19 situation, one can still…
byalvinology