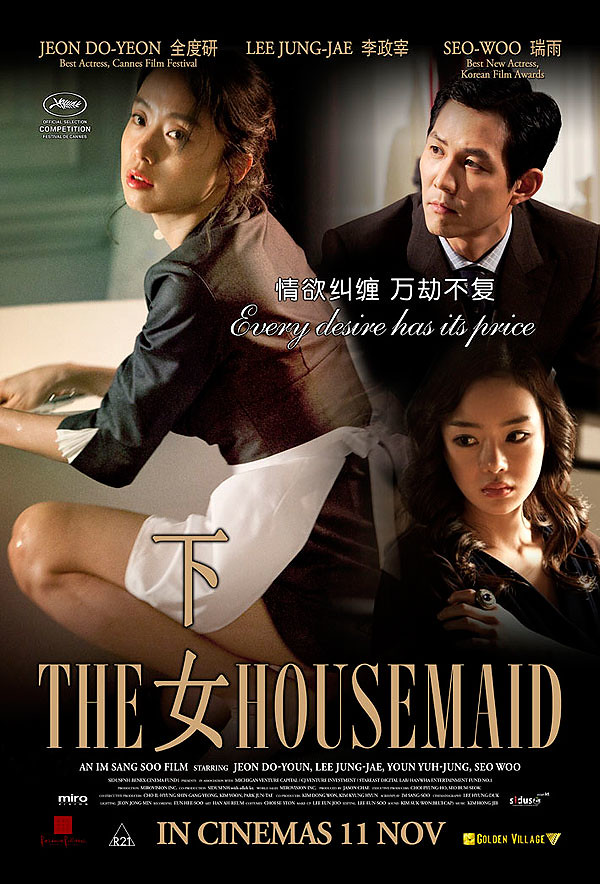 This Korean movie is a remake of the 1960 Korean classic of the same title. The original has been described in Koreanfilm.org as a “consensus pick as one of the top three Korean films of all time”.

I have not seen the original, but I am drawn to watch it now that I have watched the 2010 remake by director Im Sang-soo.

The 2010 remake stars Cannes best actress, Jeon Do-yeon as a sexually charged housemaid who brings tension to a twisted upper class, elite Korean family when she engaged in illicit sex with the family patriarch.

Eun-yi (Do-yeon Jeon), a middle-aged divorcee, is hired as an upper class family housemaid. But soon enough, master of the house Hoon (Jung-Jae Lee) takes advantage of his social position by slipping into her sheets. Hoon’s visits become frequent and Byung-sik (Yeo-jeong Yoon), an old housemaid, reports the affair to Hae-ra’s mother Mi-hee (Ji-Young Park), who plots to give Hae-ra (Seo Woo) the control over her husband. Soon Eun-yi miraculously becomes pregnant and wants to keep the baby. This is discovered by the family and she’s forced to have an abortion by Mi-hee despite Eun-yi’s plea to let her keep the baby and leave the house. Mi-hee’s plot backfires when Hoon scrutinizes her for terminating his child, even if that child is conceived illegitimately. Her forced abortion turns Eun-yi’s mental condition for the worst and she decides to take the matter into her own hands.

I enjoyed the movie. The story was a little slow moving at some point, but Jeon Do-yeon’s superb acting pulls everything along. She is a delight onscreen and captured the subtle nuances of sexual tensions between her housemaid character and her boss.

The 2010 plot seems to have an underlying theme of the helplessness ordinary Korean folks feel towards the mega-rich, chaebol-related elite classes.  Projected on the global arena, it can also relate to the world’s poorest, pitched against the mega-rich class who control most of the world’s assets and seems to be able to act at will to get anything they want (remember Lehman Brothers and the greedy, rich bankers who almost collapsed the world economy not long ago?).

The Housemaid (下女) is now showing in Singapore cinemas and is rated R21. 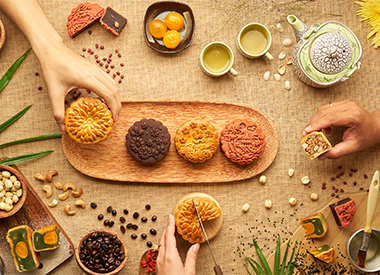 Coming back for the 15th year running, the Singapore Heritage Festival organized by the National Heritage Board will…
byKaryn Cheong Having achieved recognition at home and overseas for six editions, an expanded show format will be introduced for…
byDanielle Ann
We are now on Telegram with daily deals and giveaways! Click and join our channel. It's FREE!
See how Snapask has been helping out over 3 million students around the world. Find a perfect plan