Why did Rachel and I decided to go on a two weeks holiday in India? Well, it boils down to one guy – our friend, Jeremy who was very convincing in persuading us and another of his friend, Hui Tee to embark with him on a trip that he otherwise would have gone alone.

Jeremy is an excellent travel companion. Prior to arriving in India, he did most of the research and planned the itineraries.

This was the first time all four of us were visiting India and we were very worried about the “Delhi Belly (diarrhea)” problem which we heard from all our friends who have been there. The water in India is not suitable for foreign consumption.

The last thing we want is to be crapping daily in the wonderfully clean India public toilets throughout our trip. We bought lots of diarrhea medicine, water purifying tablets, hand sanitiser and other medical supplies for this trip. We were glad we did as most did come in handy. One area we overlooked was the difficulty in finding toilet paper and tissue paper in India. Indians either do not use them or we were extremely bad at finding things. Even when we found them, the prices will be severely marked up by Indian standards.

Enough on the preparation. Let’s move on to the trip proper.

We flew out of Singapore via India’s Kingfisher Airlines on 25 November 2009 at 10.15am, reaching Mumbai  (मुंबई) at around noon. Thereafter, we will spend a couple of days in Mumbai before flying off to Delhi on 27 November, following which we will travel to Jaisalmer, Jodhpur, Jaipur and Agra via train and then back to Delhi again to catch a flight back to Singapore en route Mumbai on 8 December.

Mumbai was our first destination as it is the most developed city in India, being the country’s commercial capital. We decided it was best for us to slowly adjust ourselves to the increasingly harsh traveling conditions by starting with the “tamest”.

Kingfisher Airline was surprisingly good, given the bad reputation the Indian national carrier has given to Indian airlines. The seats were wide and comfortable and the food was remarkably good. We enjoyed the in-flight entertainment of the latest Hollywood and Bollywood (with subtitles) movies too.

Our fourth travel companion, Hui Tee, will only join us on the third night of our trip. Hence during our first two days in Mumbai, there was just Jeremy and us.

On our first day in Mumbai, we were cheated on our first taxi ride to our hotel. The airport taxi cost us 500Rs (~S$15). It is not expensive by Singapore standards, but a total rip-off in India which we found out from Jeremy’s local friend the next day.

Our hotel was at the Regency Inn, located at 18 Lansdowne House, near to the famous Taj Hotel and the Colaba (कुलाब) causeway tourist area. The exterior of the hotel looks like a building in danger of collapsing anytime, but the interior was quite okay. Considering it’s prime location, the hotel rate was reasonable in Mumbai where real estate prices in some areas are even more expensive than in New York.

When we arrive, the city was abuzz with activities, busy bracing themselves for the 26/11 Mumbai Attack one year anniversary vigil the next day. The Taj Mahal Palace & Tower (or the Taj Hotel in short) was one of the main attacked sites and security was extremely tight when we were there.

In the day, we strolled around Colaba (कुलाबा) for some sight-seeing and also went into the Taj Hotel to experience what’s it like if we had chosen to travel in class instead. India is an interesting country of extremes – on one side of the street, there’s the opulent Taj, spotting the latest Prada stores while on the other side where our hotel was, you see cows and chicken running around.

We checked out the Gateway of India (भारताचे प्रवेशद्वार) where the 26/11 terrorists were said to have came into India from on a small speed vessel. The sea looks nice on picture, but the water stinks and there were litters everywhere.

Walking around in India is sensory assault of all your five senses. There are people everywhere and it’s hard to move around without bumping in anyone, not to mention the crazy traffic and idly cows. Every few steps you take, different smell will lure you from all directions, be it the aroma of freshly baked bread, masala spices from the street vendors or the many cow dungs and pee stains on the streets.

For lunch, we headed to the famous Leopold Cafe where ang moh tourists like to hang out. Leopold is also one of the 26/11 attack sites. When we reached, there, we understood why seeing so many ang mohs there. To the terrorists, all ang mohs are Americans and British and are hence evil.

The food at Leopold was rather pricey compared to a meal at a similar restaurant (in terms of food quality and hygiene) catered to the locals. We ordered prawn curry, garlic naan, chicken alishan, kebab and chicken briyani to share among the three of us.

Famished from the long flight, we gobbled down the food quickly. We took care not to consume any local water, sticking to bottled mineral water.

As night falls, we continue strolling around the Colaba area. We tried to look for shopping malls in vain, but could not find any. A elderly Indian man called Mr P.P. Hirani approached us and claimed he was a freelance journalist from Washington DC. We were not convinced, but played along and listen to him ramble on and on. When he found us we were looking for a shopping mall, he brought us to a crappy looking store which looks nothing like the sprawling mall we were anticipating. Nonetheless, we thank Mr. Hirani who has now morphed from a journalist to a health supplement business endorsed by the US embassy now, according to what he told us.

We never figured out what Mr. Hirani wanted from us, but after traveling in India for a few more days, we learn never to trust anyone, especially those who want to be your best friends and tell you all kind of cock and bull stories that won’t hold ground. Most of the time, they are just after your wallet.

Wandering aimlessly, we chanced upon the majestic looking David Sassoon Library and sneaked in to take some pictures. The library was only opened to members, but since the guards were lazing, we simply walked in while they were not looking.

We also explored a small art gallery and passed the Regal Cinema where you can catch the latest Hollywood and Bollywood blockbusters.

For dinner, ate McDonald’s. We ordered a McVeggie, Pizza McPuff and the Chicken Maharaja. The Maharaja is the local substitute for the big Mac as most Indians do not take beef. We saw a McDonald’s recruitment ad in the restaurant and was surprised to know that the minimum requirement to walk there as a counter staff was a university degree! All the India McDonald also have a few armed security officers guarding the restaurant. Not surprising since McDonald is associated with the evil American corporation and globalisation.

After our McDonald meal, the three of us headed back to our hotel to rest for the day. So far so good. Stay tuned for my next update for more adventures. 🙂 Meanwhile, you can read Rachel’s my paper article on our India travel if you had missed it previously.

Central is the epicentre of Hong Kong and it is well-known as a glitzy financial district, jam-packed with skyscrapers.…
byChitra Kumar 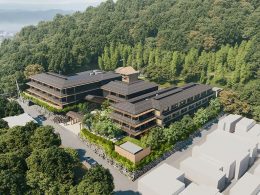 Banyan Tree Group announces its expansion into Japan, a frontier location for the global, multi-branded hospitality group. This…
byIrone Kim As part of the World Gourmet Summit 2017 line up, Punjab Grill at Marina Bay Sands is offering…
byalvinology