Via Straits Times.com. As most Singaporeans would know, Harry Lee is the English name of our Minister Mentor Lee Kuan Yew. Looks like one of his overzealous fans is in trouble with the laws for scribbling a fan note on a signage stone wall outside the Parliament House.

POLICE on Wednesday arrested a man in his 40s for vandalism, after a signage stone wall outside Parliament House was defaced at lunch hour.

At about 1.30pm, three unifomed Certis Cisco guards were seen wrestling down a man, wearing a red T-shirt and brown trousers, on the lawn outside Parliament House.

Scribbled in black marker on the top right corner of the shoulder-high wall were the words: ‘Hi Harry Lee. I love you.’

Eyewitnesses said they saw guards running across the lawn from Parliament House to nab the man while he scribbled on the wall.

It took three guards to subdue the medium-built man as he refused to be pinned down and tried to wriggle free.

As he was led away, a guard held up a piece of cardboard to cover up the words.

Soon after, other security personnel brought a canvas sheet and draped it over the sign.

The graffiti was cleaned off by 2.40pm.

In response to queries by The Straits Times, a police spokesman said: ‘On 14 Jan 09 at about 2.20pm, Police arrested a Chinese man in his late 40s for vandalism at the vicinity of Parliament House. Police investigations are ongoing.’

The National Art Gallery, Singapore will be holding a special event at the City Hall and former Supreme…
byalvinology 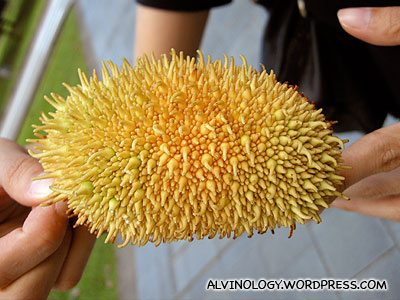 What is this durian-like fruit?

Rachel and I found this at Fort Canning Hill. Out of curiosity, can anyone tell us what fruit…
byalvinology

Bargain hunters, sound off! Giant Singapore is on a search to discover the most kiasu town in Singapore…
byStaff Writer

Stealing photos and faking the influencer life isn’t confined to Singaporean bloggers. Sadelle Yeung is the latest influencer-slash-model…
byDanielle Ann
We are now on Telegram with daily deals and giveaways! Click and join our channel. It's FREE!
See how Snapask has been helping out over 3 million students around the world. Find a perfect plan