Do you know Jay Chou has two restaurants in Taiwan under the name of Mr J.? You can find out more on Mr J.’s official website here. Rachel and I visited the one at Guangfu South Road (光复南路) in Taipei.

The restaurant is decorated with medieval style oil paintings of Jay Chou (周杰伦) and his good friends like lyricist, Vincent Fang (方文山) and Bullet (弹头). There are also many Jay Chou souvenirs and fringe products on offer at the reception, capitalising on the owner’s fame.

The precise address is as below:

Remember to call and make a reservation before going down if it’s a weekend. Rachel and I went on a Saturday night with no reservation and were initially refused at the door as the restaurant was packed all the way till midnight. We were lucky that someone called to cancel their reservation as we were walking out of the door and a friendly staff called us back.

The items on the menu is an eclectic “Italian” cuisine fused with Chinese, Japanese and other Asian influences. We ordered a pasta each, complete with a salad, a custard desert and a iced milk tea each. The price was quite reasonable, and came up to less than S$50 for two.

Overall, the food was of average quality – good, but nothing surprising or fantastic. I would guess most of the visitors went to dine there for novelty sake or are avid Jay Chou fans. During our visit, I noted that the tables around us were filled by Hong Kong tourists, gushing over every sighting of Jay Chou’s name or photo. I haven’t visited his other main Mr J. restaurant though – my colleague who went to both restaurants told me the other one is much better. I will go and try it the next time I go Taipei. 🙂 Shell has launched its new Show your Love for  Local campaign in support of local businesses, collaborating with…
byZenn

Five reasons to choose Sheraton Bali for your next family vacation

Bali is a popular travel destination for a short, beach getaway. Asher and I went on a father…
byalvinology 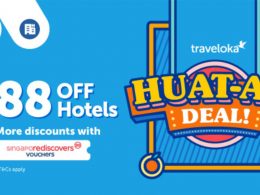 Traveloka launches HUAT-AH deals – get up to S$88 discount and more perks when combined with SingapoRediscovers vouchers!