Who is Name Wee? 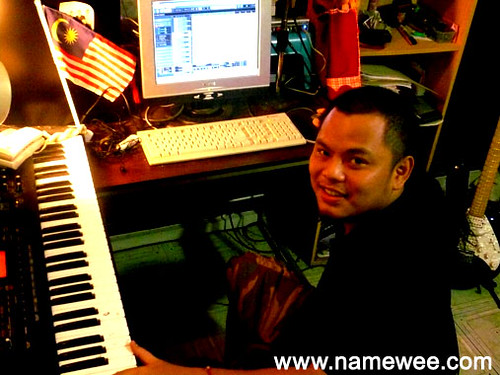 Name Wee/ Wee Chee Meng is a Malaysian singer-songwriter who first became known to the online world via his vulgarity-slewed song posted on YouTube, 麻坡的华语 – about the Muar Chinese community in Malaysia. The 24-year-old Malaysian Chinese is now studying in Ming Chuan University in Taiwan, pursuing a mass communications degree. Check out his personal website HERE.

Recently, Wee had ‘promoted’ himself from being famous to being notorious. He is in trouble with the Malaysian authorities who are not too please with one of his new song, Negarakuku. Ironically, Wee claims the song was written as a tribute to his birth country to celebrate Malaysia’s 50th anniversary of independence.

Personally, I admire his guts for fronting the two songs, and not hide behind an anonymous nick as is usually the case over the Internet. It’s good to be proud of your own heritage and to shout it out loud – for that, I give Wee double thumbs up.

Some will call him unpatriotic, racist, troublemaker, etc – but at least Wee did not hide his face.

Who is Mocca Muscle Man?

I am sure you would have noticed him in the funny Mocca.com advertisement if you watch local TV.…
byalvinology Hmm…. I am seeing widespread 715 errors across entertainment news site in Singapore. Here is an example: One…
byalvinology

Yesterday morning, local actor Aloysius Pang was charged with drink-driving. He was seen accompanied by Dasmond Koh, the…
byCarrie Er