Flaunt your vocal prowess and WIN over $10,000 at Downtown East’s Karaoke Contest

Ring in the Lunar New Year and immerse in the spirit of romance on Valentine’s Day at Downtown East. From now till Feb 11, discover the sumptuous eats and treats, sing your heart out for cash, and smash your way to win tickets to a world-class event.

Downtown East is rewarding the winner and top three finalists with more than $10,000 in prizes ($5,000 in cash) and more!

The Valentine’s Day Sing-Off is open to everyone. You can sing in nearly any language as HaveFun Karaoke has a database of over 450,000 songs in more than 12 languages. The contest is open to all Singaporeans and PRs residing locally, aged between 18 and 35 years old.

Registration is $15+ for the public and $10+ for nEbO members (excludes ticketing platform charges).

There’s also something on the table for ping pong fans happening at Downtown East (Event Square). Grab the paddle, show off those nifty moves from 4 – 12 February with ‘free-play’ sessions – and take the opportunity to see some great table tennis action in showcase matches and challenges (4 & 11 February, 2pm).

On 4 and 11 February, audiences catching the showcase matches will stand a chance to win coveted tickets (worth from $28 each) to the finals of the second edition of the Singapore Smash 2023 table tennis finals (7 -19 March) at Singapore Sports Hub by taking part in novelty games hosted by a WTT emcee at Event Square.

Tickets to the finals are also up for grabs via Downtown East and U Sports Facebook giveaways happening later this month.

The Smash Showcase is organised by World Table Tennis (WTT), with U Sports community bringing the games to the heartland with showcase matches by professional qualifiers.

Don’t slave away in the kitchen when you can feast with ease at eight different restaurants offering Chinese reunion dinners in E!Hub and E!Avenue.

Double your Linkpoints, Huat Ah! 1 January  – 28 February. Double your enjoyment with Link! Redeem a range of vouchers for your next visit at Downtown East with no minimum spend. 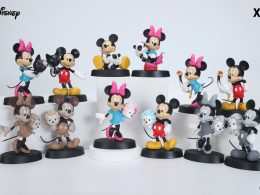 Security guards at at Apple’s West Lake location in Hangzhou China had to take down the fencing used…
byStaff Writer
Power up your child's learning with Geniebook.
Sign up for free demo
This is default text for notification bar
Learn more