This Japanese horror movie is based on the retelling of the Japanese urban legend, “Kisaragi Station”. In 2004, a thread on the Japanese 2chan textboard recounted a spooky experience at a train station, not found anywhere on any map in Japan. The post quickly went viral online and still continues to be widely debated. You can read an English translation of the original post here.

Directer Jiro Nagae’s fictionalised take on this urban legend has student Haruna (Yuri Tsunematsu), who is researching folklore, track down the poster, Hasumi (Eriko Sato), to investigate the facts.

I have always loved horror stories that are based on urban legends. They often do well at the block office as sleeper hits because everyone who know of the original occult tale would like to know if the movie can debunk the myths around it.

The movie is shot with a hand-held camcorder style, following the likes of horror classics like The Blair Witch Project. This is to add an element of intimacy to the storytelling, to make the audience feel like you are interacting with the cast directly.

Other than the two leads, the other characters in the movie are more one-dimensional, including the typical bunch of young delinquents as villains, an innocent-looking high school girl and an office worker:

The special effects look cheesy… like badly done to the extent that the spooky moments look kind of comical. I don’t know if this was deliberate, but it works for me as it keeps me entertained and hooked to watch till the end.

Overall, I found the movie very enjoyable, but more as a suspense film than as a horror movie. This is a horror flick that is suitable for watching with friends and family who usually eschew from the genre as it is not that scary, yet still leaves you sufficiently entertained at the end of it all.

There is a plot twist at the end which will leave you thinking if you would have made the same decision as Haruna if you were in her shoes – I think I would too. 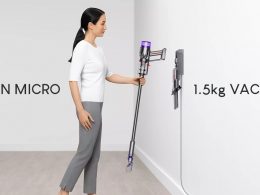 Dyson launches its first 1.5kg lightweight vacuum, its lightest yet, and the only 1.5kg vacuum that doesn’t blow…
byIrone Kim