This June, you can look forward to exciting new wildlife encounters along Night Safari’s walking trails, including the park’s first walk-in Civet exhibit and the debut of two new unique nocturnal mammals – the Brazilian Porcupine and Grey-handed Night Monkey.

Found in the Leopard Trail, the walk-in civet exhibit is the new home for seven Common Palm Civets and seven Small-toothed Palm Civets.

You can explore the habitat which is abundant with trees, and manmade vines and branches for the civets to showcase their natural climbing abilities. Civets are arboreal species and spend most of their time in trees.

You will be able to observe the civets’ feeding and foraging up close. Feeders are hung in areas near the walkways throughout the 677 square metre habitat.

It is safe for you to share the same unobstructed space with the civets and signs are up to remind you not to touch or feed the animals. You are also required to stay on the designated pathways.

At the Fishing Cat Trail, the Brazilian Porcupine and Grey-handed Night Monkey will take up residence in the new mixed-species habitat featuring small arboreal mammals native to South America.

A pair of Brazilian Porcupines has debuted in the Fishing Cat Trail exhibit while a pair of Grey-handed Night Monkeys will soon join them later this month.

A small mammal related to Raccoons and Coatimundis, the Kinkajou, will also be sharing the exhibit. 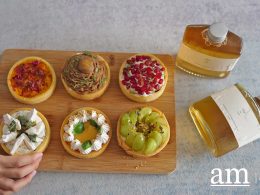 if you love tarts, you got to try these elevated tarts from The Tartlery. Helmed by inaugural Masterchef…
byalvinology

Finally, accountability: Women in tech force the world to look at sexual harassment

HUAWEI WATCH FIT, the everyday smartwatch fit for all scenarios, will launch in Singapore on 24 October 2020.…
byIrone Kim