I love brownies, but they are usually eaten as a dessert and served at the end of a meal or with other sweet treats like ice cream. What if, brownies can be snacked like potato chips while you enjoy your favourite shows on Netflix?

Introducing DAN’S BITES, a Singapore home-grown snack brand that sells Brownie Crisp in different flavours such as Dark Chocolate, Dark Chocolate Mixed Nuts, Milk Tea and White Chocolate. DAN’S BITES Brownie Crisp retails at S$10.80 for two packets online via their official website. You can mix the flavours for your order, with free delivery for orders above S$30.

The founder Dan claims that the Brownie Crips was incidentally born from a home experiment in baking brownie inspired by a traditional family recipe.

Each piece of Brownie Crisp gives you the crunch of a satisfying finger snack, while retaining the milky, chocolaty delight of a brownie. We tried all four flavours and would recommend the two Dark Chocolate flavours for those who wants a closer match to traditional brownies. 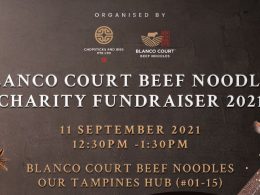 Senior Parliamentary Secretary, Ministry for Transport, and Member of Parliament for Tampines GRC Baey Yam Keng will be…
byIrone Kim

Contest Alert: I am giving away a mystery prize, sponsored by Qatar Airways. To win, simply retweet on…
byalvinology After a month of celebration with their 40th anniversary menu, Morton’s is closing the party with an exclusive…
byDanielle Ann

If you like cheesecake and also brownies, here is a two-in-one sweet treat that would satisfy your sweet…
byalvinology
Power up your child's learning with Geniebook.
Sign up for free demo
This is default text for notification bar
Learn more