Drivers will understand the dreaded feeling of seeing a light flash as you zoom past, or receiving a letter in the mail from the Traffic Police, even though you are SURE you adhered to all the audio warnings on Google Maps and Waze. There are also at least 33,000 members in 6 Telegram chats for Singapore motorists dedicated to user-generated info on avoiding speed traps & new camera locations. Yet, the total number of traffic offences recorded by the Traffic Police has risen from 152,700 in 2015 to 181,000 in 2018.

As such, the biggest issue motorists face with current maps and informal sources is inaccuracy. As we welcome the gradual reopening of Singapore in Phase 2, the last thing we would want is to zoom gleefully into town… then kena a speeding fine.

In addition, the Police Speed Laser Camera (PSLC) can be found in 53 locations – typically at speeding hotspots, accident-prone and high-risk areas such as overhead bridges, around corners and bends – and this is usually where motorists get caught, because current apps do not highlight red zones for PSLCs.

Get your facts right and avoid fines with Co-Driver, the new audio integration feature supported by Traffic Police found exclusively in the Motorist app. While other apps provide crowd-sourced and often outdated warnings for red-light and traffic cameras, with Co-Driver, Motorist is the only app with verified and real-time data from the Traffic Police that includes red zones for Police Speed Laser Cameras (PSLC).

This key function is not available to other apps as Co-Driver is developed as part of a strategic partnership between the Traffic Police and Motorist, and is endorsed by the Traffic Police. This is also the first time that Traffic Police has partnered in an official capacity with a third-party application to enforce road safety.

The Co-Driver function on the Motorist App is now available for free via the App Store and Google Play. Besides speed cameras and red-light cameras, future plans include adding audio alerts via Co-Driver for bus lane hours, ERP timings and rates, and traffic incidents.

I started Alvinology.com back in 2007 as a experimental platform to test content. Eight years later, my little…
byalvinology 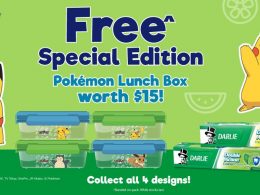 Darlie and Pokemon collaborate to create special edition Pokémon lunch boxes and a Special Roadshow your kids will surely love!

Darlie is back with an all-new collaboration and this time is with Pokémon, to create special edition Pokémon…
byIrone Kim