This ‘When Mr Kiasu Meets SpongeBob SquarePants’ coffee table full-colour book is a must-have for all fans!

To celebrate 20 years of SpongeBob SquarePants, the coffee table book is a localised tribute to the number-one kids’ animated series on TV and titled ‘When Mr Kiasu Meets SpongeBob SquarePants’. This will launch at the Singapore Comic-Con to be held on 7 – 8 December 2019.

The book features the unique illustrative style of Bikini Bottom meeting Singapore in this clash of worlds when SpongeBob runs into Mr Kiasu and both embark on an epic adventure.

Fans can also get their books autographed by Lau, who will conduct fan-signing on both days. Thereafter, the coffee table book will be available at leading bookstores from 9 December onwards. The merchandise will retail at Area65 and VivoCity Toys“R”Us.

Enjoy the Water B SpongeBob-themed Cruise

Fans can also look forward to a complimentary round-trip ticket ride onboard the Water B SpongeBob-themed cruise ride with every purchase of the book. One ticket is issued with each book and this is limited to 200 books.

Embarkation will be at the Fort Canning Jetty at Clarke Quay (next to Liang Court).

20th Anniversary Celebrations in Asia in 2019

During the Hari Raya season, SpongeBob celebrated with fans in Paradigm Mall Johor Bahru in Malaysia with a gigantic inflatable which made it into the Malaysia Book of Records as the biggest inflatable cartoon character in the country.

In the Philippines, Nickelodeon partnered with Secret Fresh – a collective of Filipino artists representing a variety of mediums, including graffiti, paintings and sculptures, art toys, streetwear fashion, furniture and other innovations of classic and modern designs combined – who re-imagine SpongeBob and create limited-edition art, figurines and prints.

Japan kicked off celebrations at Tokyo Summerland, one of the largest waterparks in Japan; while in China, Nickelodeon collaborated with internationally renowned artists whose unique creations were available for sale at an exhibition pop-up in Shenyang’s MIXC mall.

Later in 2019, there will be publishing and merchandise collaborations with Faza Meonk (creator of Indonesia’s Si Juki).

As 2018 draws to a close, Twitter reminisces the momentous events in Singapore whole year round from politics,…
byIrone Kim 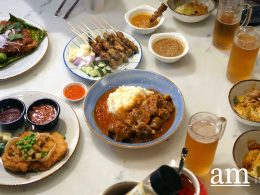 Following the success of its first outlet at Hillion Mall, Hainanese cuisine specialty restaurant, The Hainan Story has…
byalvinology The most unique dining experience: Eating with The Cleft Collection silverware

About two weeks ago, I received an invitation to a unique dining experience at The Ritz-Carlton, Millenia Singapore,…
byRachel Chan