While it’s wrong to stereotype Chinese nationals as possessing bad public behaviour, we can’t help but be awed at the audacity (and sheer foolishness) of Jiale Zhang, a 23-year-old Chinese student currently enrolled in the Philippines. Why? You don’t see a foreigner go around assaulting a policeman.

Jiale Zhang’s last arrival in Manila was in October 2018, but she has been studying fashion design in the country as a freshman Bachelor of Fashion taker at the School of Fashion and Arts (SoFA) Design Institute in Makati, Metro Manila.

What happened with Jiale Zhang and the Filipino policeman?

Recently, a policy has been put in place in the country’s capital that almost all forms of liquid in bottles and containers are not allowed on trains. Exceptions to this rule are mostly medical substances and children’s food and drink.

Jiale may not have been aware of this rule, and was stopped at 7:30 am at one of the busiest stations in the metro on a Monday morning. She was not allowed to board the train because she was carrying a taho drink, which is basically soy pudding and boba pears in sugar syrup and water, similar to tauhay.

Authorities have filed a complaint of unjust vexation, disobedience to a person in authority and direct assault against the foreign student who threw “taho”at a cop stationed at MRT.

The complaint was filed at the Mandaluyong prosecutor’s office. | @kristinepatag pic.twitter.com/YkFwNFS74O

PO1 William Cristobal of the Philippine National Police told her to consume her drink before boarding the train, but this made her agitated.

When the policeman at the station told her she would not be allowed on the train with her drink, she became angry and shouted at the policeman. While the enforcer was trying to calm her but insisting the rules should be followed, she threw her drink at the poor cop, who was drenched from head to toe in soya and syrup.

What did the Philippine authorities do to Jiale Zhang?

According to reports, Jiale has been charged with direct assault, disobedience to person in authority and unjust vexation for her little drink stunt, and she has the mug shots to show for her little drama.

Currently, the Philippine Bureau of Immigration seeks to file a case against Jiale to deport her.

A commissioner for the Bureau described the incident as “an utter display of disobedience and arrogance against a person of authority,” adding that the office “will not tolerate such acts, as this shows disrespect to the country.”

“I was in a bad mood and I was unable to control my emotions,” the fashion student said in an interview with GMA Network. “I really admit the mistake I made and I feel so regretful for it. I’m really, really, sorry and I really ask if its possible to have another chance for me.” she added.

Her lawyer, Sandra Respall, said that her client did a minor thing, but it was blown out of proportion because of how it went viral on social media.

Jiale is currently being detained at Mandaluyong Police Community Precinct 5 near the Boni MRT station.

The political climate in the Philippines has also seen renewed closer ties to China, with the country’s president Rodrigo Duterte expressing favourable views with China. An influx of Chinese workers has also occurred in the country.

Some days, we really miss Uber. In a Facebook post on January 20, user Naomi Ho Is Wei…
byDanielle Ann 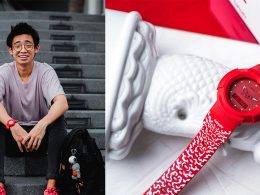 Toyota Vios Returns – Made Better Inside and Out