Scammer posts own name and NRIC, threatens to break your daughter’s arm if you don’t pay in latest text scam

In a Facebook post by the Singapore Police Force, they warn the public about a new scam that involves threats of child kidnapping and a demand to deposit money into a bank account. But for some, the scam may be too much of a mental exercise.

Below is the message that the Singapore Police Force posted as a warning to the public about this common scam. 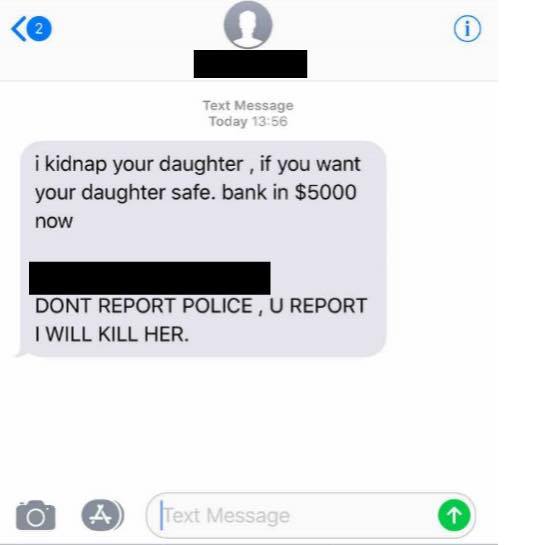 Using text messaging, the scammers say that they have the person’s son or daughter and that they should deposit a certain amount into a bank account. In other variations of this scam, they first threaten the parent that they will kill the child if the incident is reported to police.

In the photo of the scam message below, you’ll notice that the scammer included a name, an NRIC, and asked that he be called at that moment. He first threatened to break the daughter’s leg before 5:00 pm. Three hours later, he sent another message, this time without his NRIC and a new name similar to the first one, and threatened again with a different amount, one much higher than his first demand. He also helpfully included his bank account number and a new threat with an emoji.

Here is another message that has been sent to the public. This one doesn’t give any details except for the bank account number and the amount. The message threatens, however, to kill the daughter. 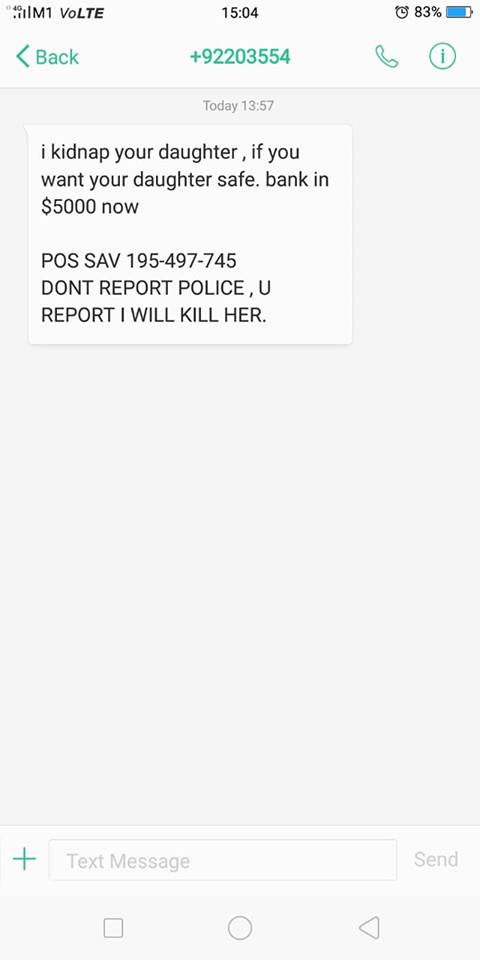 An identical message was sent to a completely different number, which may indicate that this really is a widespread text scam that is blasted to random numbers.

According to the Singapore Police Force, the amount of reports have become quite common, which is why they issued an advisory to the public.

What are you supposed to do?

The Singapore Police Force say that the recipient of messages like this should do the following:

What netizens are saying

Here are some comments that netizens have over the police advisory:

Some clearly referenced this to Liam Neeson’s movie, Taken, which has become a viral meme and has spurred cult status of several lines of the movie.

Someone even had the time to type out all that dialogue to make a joke.

Others weren’t satisfied with how the police handled this.

Some speculated that the recent cyber attack on public information could be the reason that their number as now in the hands of scammers.

Other commenters lamented the amount the daughter was worth in the threat.

While this commenter wished that he would get sent such a message so he could troll the scammers.

There were more questions about what the police could be doing.

Some even went so far as to tell Liam Neeson instead of the police in a joking manner.

While this comment suggested the police should do more about these messages and trace the sources.

What do you think of this scam? Have you gotten messages like this? Let us know in the comments!

One of the world’s leading smartphone brands, HUAWEI, is very confident of their best-in-class camera and we can…
byalvinology

[One Night Only] Comedy Central Stand-Up, Asia! Live in Singapore

If you think Asians can’t tell jokes, you have to go to the first ever Comedy Central Stand-Up,…
byalvinology 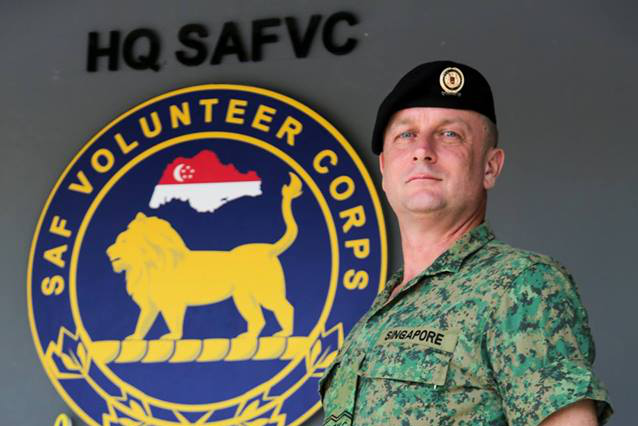 In a post widely discussed on the ubiquitous and always-active HardwareZone forums, netizens reacting to SV2 Alex Voss’…
byStaff Writer

Get ready! Madame Tussauds Singapore has launched its new immersive zone, the Marvel 4D Experience! Now a permanent…
byDanielle Ann
Hello. Add your message here.
See how Snapask has been helping out over 3 million students around the world. Find a perfect plan