While there are yet to be real-life snakes on a plane, figurative serpents in the form of thieves could be a lot of worse.

Thanks to the quick thinking and kindness of this Malaysia Airlines passenger’s friends, a thief was caught in the act of extracting cash, gadgets, and other valuable items from the former’s carry-on luggage in business class. In this Facebook post by Malaysia Airlines passenger Faiz Mokhtar, you can read his whole experience about how he, his friends, and the airline crew stopped a thief in action on flight MHO751 from Ho Chih Minh City to Kuala Lumpur here.

I was on the short flight MH0751 from Ho Chi Minh City flying back to KL on 15/8/18, a working trip with my four business partners.

After putting in my laptop bag in my designated overhead cabin, I settled in my seat on the 2nd row, minding my own business. One of my partners who sat behind me noticed a fellow passenger taking my bag which he brought to his seat on the 4th row. My partner alerted me to check on my bag and true enough it was gone.

I went to the man’s seat and caught him off guard going through my bag and his left hand holding some of my foreign notes currency (EURO and USD, which I am 100% sure are mine), looking like he was about to keep them in his pocket. I confronted him with the rest of my partners surrounding us. I did a thorough checking of my bag, because MY BIGGEST CONCERNS were my travelling documents (passport etc.) and whether he had implanted any illegal items, in an attempt to use me as his transporter (read: drug mule syndicate).

We then alerted the stewardess who was quick to take the necessary actions. Fortunately the man didn’t become aggressive and this all happened before take off (during the busy period of passengers boarding the flight). Security and police were called in, report was made, the pilot and crews declared the flight was not safe to take off until the man is taken off the flight.

He was then forced to depart off. Apparently, the crew informed us, there is a syndicate that has been conducting this modus operandi on China, Hong Kong and Vietnam flights. That guy was from Hong Kong and he is flying to KL with no return ticket, probably his route depends on his “loot”.

It was quite dramatic as so many things could have happened and gone wrong. Yet, the cabin crew handled it professionally, even though it was her first time experiencing it first hand (cabin crew are well aware of this type of crime). My biggest gratitude and respect to the Lead Stewardess, Ms Mazlinda of Malaysia Airlines for her unwavering calmness and diligent work in ensuring the man being handled accordingly. To the extent she offered herself to remain in Vietnam to make the police report on behalf of me. Luckily, all paperwork matters can be done in-flight and Alhamdulillah we took off safely after an hour delay. The crew managed to calm the other passengers well despite suspecting some of the other syndicate team-members are still there hiding in between them.

This syndicate is quite bold because once in-flight, there is no cctv footage as proof, and the conflict of which laws of the land should be applied as they’re considered to be in international zone. I might be wrong on this as I myself am unsure what actions have been taken to-date. Oh, the syndicate will even play language barrier act to get away with this.

So everyone, please be careful of your belongings, and use extra safety tool i.e. bag lock, and do travel in groups when possible. Criminals are indeed everywhere even on air and they sure can afford business class! According to the post above, Mokhtar had just put his bag in the overhead compartment above his seat in business class when his traveling companion alerted him that a man had taken his bag to a seat in the fourth row. Mokhtar and his companion were on the second row.

Mokhtar and his friend went to check the compartment and the bag was gone. They went to the man and saw that he was already going through Mokhtar’s bag, with some bank notes in his hand.

Mokhtar was afraid that his travel documents could be stolen or that the man could be planting illegal substances in his bag. When confronting the man, the flight crew approached them and helped make the situation go smoothly.

They calmly addresses the matter and notified the pilot, who decided that the flight was unsafe and that the man had to disembark before the flight could leave. Airport police and authorities were alerted and attended the matter. According to the post, this is a common event on flights with Chinese passengers, particularly those flying out from Hong Kong and Vietnam. Upon checking the flight records of the would-be thief, he does not have a return ticket.

What’s more, there is also a chance that there are some of his accomplices left on the plane, but who, of course, would not identify themselves.

In the end, the flight was able to commence and Mokhtar commended the pilot and flight crew for handling the matter very smoothly and efficiently.

Have you encountered this incident before? Tell us about your experience! 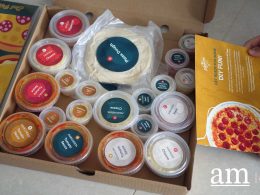 Looking for family fun activities over this Father’s Day weekend? Gather the kiddos and create your own pizza…
byalvinology Misfit Ray – The Most Stylish & Versatile Tracker To Date

For the past week, I started wearing the Ray and I never had to remove it! Yup! Non-charging…
byClaudia Lim
Power up your child's learning with Geniebook.
Sign up for free demo
This is default text for notification bar
Learn more