As private hire cars such as Grab are on the rise, many driving licence holders in Singapore have considered getting a private hire car licence to earn some extra cash. However, getting this licence is not as easy as it seems!

According to an article on Zaobao, about 75,600 people have applied to the Land Transport Authority (LTA) for a Private Hire Car Driver’s Vocational Licence (PDVL) but only about half (approximately 32,400 people) have been successful in this endeavour.

Here is a rough translation of the article, which was written in Mandarin:

Out of the people who applied, approximately 23,900 had submitted the PDVL application before July 2017 and LTA had given them a time period of one year to attend compulsory lessons and get their licence approved while enjoying the privilege of getting to fetch passengers.

However, if these drivers did not manage to get their PDVL application approved by 30 June 2018, they would not be able to continue being a private hire driver. LTA published the aforementioned statistics on 1 June.

Currently, the passing rate for the PDVL examination is 70%.

Should a driver decide to take to take on private hire passengers without a valid PDVL, he or she may be charged in court and be fined (a maximum of S$1000), jailed for up to three months or both.

Conditions for getting a PDVL

Here are the main areas to consider behind getting a PDVL: Why the desire to get a PDVL?

More and more drivers are looking towards being a private hire driver as a viable full or part time job. This is due to companies like Grab and Uber (which is no longer available in Singapore) which has many incentives for drivers who join. This includes the fact that the job as a driver allows for the luxury of working and taking a break whenever one feels like it. By switching off the app, one can end work or have a meal at any time. Grab, for example, gives drivers certain perks such as being able to choose customers based on price and the incentive of extra cash should the driver hit a weekly target. Grab also has a revenue calculator for drivers to estimate their profits based on their driving style and schedule. However, of course, there are also certain rules to abide by such as no ongoing jobs while driving.

Furthermore, with the increasing number of cars (which lead to bad traffic jams during peak hours) in Singapore as well as the recent MRT breakdowns, getting a PDVL and taking this role on may be a good choice as you will be able to take on passengers and earn money quite assuredly. 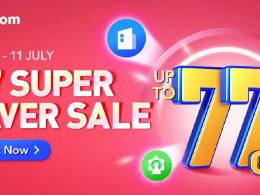 Trip.com kicks off 7.7 Super Saver Sale offering 50% OFF selected hotels in Singapore, Malaysia, Thailand and Indonesia and a chance to win a FREE Luxury Staycation!

Trip.com to launch its 7.7 Super Saver Sale in Singapore and Malaysia alongside its #TripLiveShow livestream, featuring exciting…
byIrone Kim Ready to welcome our AI overlords? In Munich, Huawei announced the HUAWEI Mate 10 Series, which will open…
byStaff Writer