For every season, Nikko holds various festival and events. Events at shrines and natural cultural events in Nikko have a long history and are a highlight of the region. There are festivals and events where tourist can participate.

“Heike Festival” is a unique festival unique to Yunishigawa Onsen where the legend of Heike Ochiudo remains. The “Heike Emaki” where the total of 200 people who dressed like Heike’s warrior or princess walks around is quite a dignified parade. Also, events such as BIWA and GAKAKU (Japanese traditional music) playing, and events related to Heike are hold and to honor of ancient times.

On June 1, Kokoro Kawa Akari (Illumination at Yunishigawa River) is scheduled. On June 2 Pre-event and June 3, there will be a Main event of Heike Emaki. Only women who stayed at Yunishigawa on Saturday can join the parade.

There’s a story in Kojiki􏰃, the oldest extant chronicle in Japan) where “Daikakoku-sama” was trapped in fire and a mouse led Daikakoku-sama to safe place. On the day the locals are to receive the benefit of Daikoku-sama, they will wish for worship as well as wish to pray for each wish by shaking the “Uchide no Kozuchi (Japanese Magic Hammer)”. A large shrine or mikoshi (portable shrine), which is also said to be the biggest in Japan, will be displayed in front of main shrine big tori gate, and perform a daily festival (worship God) at 7 o’clock every morning during the festival.

You can visit the big shrine mikoshi anytime during the period. Also on the June 14, there is a “Mikoshi Togyo”, where about 350 people bring the 1.93 meter square Mikoshi, which is said to exceed the weight of 1 ton, and with a vigorous call, “Choisa! Choisa!“ as they parade around the city area. 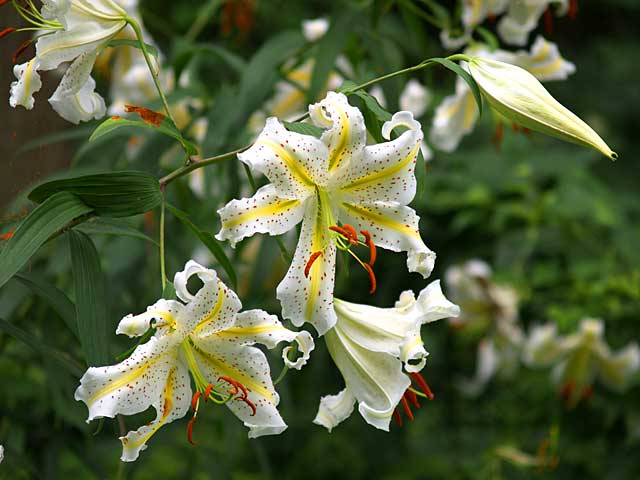 As about 5,000 gold-banded lilies (yamayuri) blooms for the season, the event “Yamayuri Viewing Week” will be held.

Big summer event at Kinugawa Onsen will happen at the festival. Just like in Japanese anime, tourists get to walk around, buy souvenirs, play games, and eat from food stalls as colourful fireworks adorn the skies. It is a festival that has been celebrated for more than 1,200 years from the end of the Nara period. Highlights for this event is the Mount Nantai Worship Climbing Festival, where the summit, the Okumiya (rear shrine) is very crowded with climbers and worshipers. Following the Genpei war, the ancestor Nasu no Yoichi, a resident of Shimono, shot the Japanese flag of the Hinomaru standing on a small boat of Heike in the battle of Yashima.

From this ancient event, the archery tournament follows. Approximately 1,500 people participated from Kanto area only and boast the largest scale of tournament as the whole Japan.

For information on how to get to Nikko and other information, send an email to this address: [email protected]

This picture first surfaced on the EDMW forum: I am not sure if it’s a prank or if…
byalvinology

You can now use cryptocurrency to pay the Restaurant, SkyBar and Club Lounge at CÉ LA VI Singapore

#caretoshare: How I lost 20kg and regain my health with diet change and exercise This article is contributed by Fong Wei Kurk in response to our previous article, STATISTICS DON’T LIE –…
byContributor