Most recently, the Star Awards 2018 have generated lots of reactions due to changes in format and the reveal of unexpected and surprising award winners. Of course, the faces of local actresses and actors are definitely familiar to Singaporeans who follow local TV dramas and shows. We often forget, however, that behind each celebrity’s glamorous presence are stylists that organise their entire ensemble and look for them. One such stylist would be celebrity hairstylist David Gan, who has worked in Singapore for local public figures for over 20 years.

On Instagram, David is known for posting candid and blunt statements showcasing his views on local artistes and local company Mediacorp. For example, he shared this snippet of a conversation in Mandarin, supposedly between him and a friend, on his Instagram story.

The conversation goes roughly as follows:

Friend: (quoting a title from a local Chinese magazine) “Zaobao – Although Rebecca Lim is set to be Mediacorp’s next “Ah Jie”, the way she carries herself cannot be compared to senior celebrities like Jeannette Aw and Rui En. Whenever these 2 mentioned celebrities attend an award show or event, Rebecca Lim would immediately lose the spotlight. This clearly shows that even with supporters and patrons, celebrities can’t sway the hearts of local TV fans that easily.”

David: “I don’t agree. Rebecca Lim is still young thus there isn’t much basis for comparison. Zaobao writers are ignorant of the matters of the media, if you asked them if they had ever dealt with or seen a huge sum of money such as $10 million, they probably haven’t! Maybe only $10 million in Indonesian Rupiah!”

Friend: (laughs) “The reason why they would publish such an article is because they have run out of material to report on.”

David: “Let them write what they want, they have nothing else worth reporting. This is their job. After studying and getting a degree, all they write is dog shit. They only know how to make petty comparisons, should we get them to compare wealth status among themselves as well? Based on Rebecca Lim’s current popularity level, she can easily overtake Jeanette Aw and Rui En when she reaches their age. Why can’t Zaobao take on a more encouraging approach, why do they have to write such toxic articles? This brings nothing but harm to the local entertainment industry. What the artistes need are encouragement and charisma. If Zaobao writers are really as clever as they think they are, they should compare their writing standards with China, Taiwan and Hong Kong journalists.”

It is clear to see that David is extremely candid in sharing his views as his account is open to public to view. He also defends rising stars in the media industry which he is a part of. He also comments on local artistes in his posts, such as in the feature above where he raves about Kym, who is a renowned figure in Singapore as well as his close friend. He also praises celebrities like Joanne Peh, whom he feels has what it takes to be a true star and actress. Akita: A Tail from Northeastern Japan

There is a famous bronze statue of a dog outside of Shibuya Station, near a popular waiting spot. …
byStaff Writer

How are Mas Selamat Kastari and Edison Chen related?

Lunch time joke yesterday: How are these two men related? Can you see the link? Mas Selamat Kastari…
byalvinology Did Lawrence Wong clap back at Carrie Wong and Ian Fang’s shady texts on how he doesn’t measure up to Aloysius Pang?

In a move that surprised no one but is appreciated by everyone, Lawrence Wong may have clapped back…
byDanielle Ann 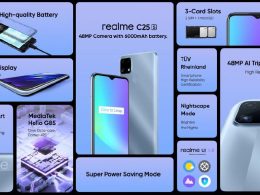 realme launches the C25s in Singapore, the brand’s latest smartphone that comes with exciting leap-forward features. The realme…
byIrone Kim
Power up your child's learning with Geniebook.
Sign up for free demo
This is default text for notification bar
Learn more