How many social media disasters do we have to see for people to realise that you just can’t post anything online and expect to escape ridicule?

Case in point, this girl named Bibi Xyza who was so excited to meet American singer, Asia’s Got Talent Judge and pop star Jay Park that she let her enthusiasm get the better of her.

As you can see from the photos taken from her Instagram Stories below, she cozied up to the international star and posted a sexually-charged comment. Since her Instagram account was public, people were able to take a screenshot of her story and post it on eternally-active Hardware Zone Forums. Since then, the post has been going strong with almost 70 pages of comments and discussion–including posts from Bibi Xyza herself.

The photo went up on the forums on December 8. The next day, she registered and began responding to the comments on the thread. Take a look:

She claimed that the photo was a joke and that she didn’t really mean what she said in the captions. Commenters tried to ascertain that she was the girl who posted the photos. Some of them suggested that she ask the admins of the forums to delete the thread or lock it to prevent it from growing further. She answered:

At some point, some netizens recommended she file a police report for cyberbullying and for harassment. This is because of the hateful comments and speculations about her reputation.

As of publishing, she has taken the original IG story of her photos with Jay Park and has since been putting up rants and the police report she filed in connection with the forum thread. Take a look: You can see from above that she feels very upset and that she wishes for the commenters and the one who originally posted her photos to die. She continues to rant about the incident in later stories: As of publishing, she has not moved to make her social media accounts private except for Facebook–instead remaining very active on Twitter,  and Instagram.

She was so active and did not change her profile to private that netizens were able to download and disseminate her photos.

While the thread is still going strong here, no one can say when it might be locked since a police report has been filed over the contents of the comments. Here are some things that netizens have said over the past few days:

Some commenters don’t know who Jay Park was. Or do they?

Others asked if she put the comments or captions in the post. If it were her friend or someone else, it would be a completely different story, right?

Some commenters judged her very harshly, and mentioned her parents.

This commenter said that netizens should stop harassing her and that she is not doing anything wrong despite the sexually-charged nature of her post.

Other commenters agree that she was right to file a case accusing the commenters of cyberbullying. If the charges will stick remains to be seen.

Some people on the forums were clearly trolls and derived too much enjoyment from her mistake and the events that are unfolding.

What do you think of Bibi Xyza’s photo with Jay Park? Who is at fault? What advice would you give her? Let us know in the comments!

I have this theory that ties in all the different hints dropped in the show. My conclusion is…
byCaymen Tan 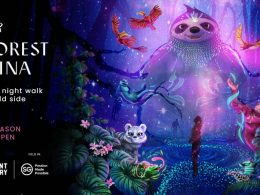 This Mid-Autumn Festival, the rainforest comes to life in a symphony of lights, music and interactive play installations,…
byIrone Kim