The Force is strong in Marina Bay Sands’ light show Spectra as it goes Star Wars: The Last Jedi on November 25

In celebration of the highly anticipated movie of the year, Star Wars: The Last Jedi, a month-long series of events and exciting activities await this festive season from 17th November.

Giving Star Wars fans a memorable evening, Marina Bay Sands has adapted its nightly light and water show, Spectra, for a special Star Wars: The Last Jedi themed performance.  It will be an epic state-of-the-art performance combining lasers, light and water movements with visuals from the upcoming sequel.

The themed multimedia light and water show is a first of its kind in Singapore where fans will be able to enjoy this special display, set to the remarkable film score from the franchise.

The event starts at 8pm, with the show to come on at 8.30pm, on Saturday, 25th November and is open to members of the public.

Breakout star Kelly Marie Tran who plays the part of Rose Tico in Star Wars: The Last Jedi will be gracing the event where she will join Marina Bay Sands President and Chief Executive Officer George Tanasijevich in debuting the never-seen-before edition of the light and water show. This event also marks the launch of the advance ticket sales for Star Wars: The Last Jedi.

For audiences who are unable to make their way down for the show’s debut, there will be a second opportunity to catch it on 15 December at 8.30pm, following the opening of the movie in Singapore on 14 December.

Embark on a cosmic adventure through the Star Wars: The Last Jedi themed decorations this Christmas at any of the Frasers Centrepoint Malls island-wide! Christmas trees will be decked in colours from the Light and Dark sides along with hanging garlands and wreaths featuring BB-8 and Stormtrooper baubles.

The Centrepoint won the voter’s choice award for the Best Dressed Building on Orchard Road last year. This year, it is gunning to maintain its top spot with its attention to Star Wars details in the mall’s decorations. Voting may be done through the Christmas on a Great Street website  from 17 November through to 3 December 2017.

Never underestimate the Force. Advance ticket sales for the blockbuster sequel of the year, Star Wars: The Last Jedi, will kick off in Singapore on Saturday, 25th November 2017 at 8.30pm.

Fans will be able to purchase the tickets on TheLastJedi.Asia The classic case of expectations versus reality, for the most part, ends badly – and birthday cakes are no…
byCarrie Er 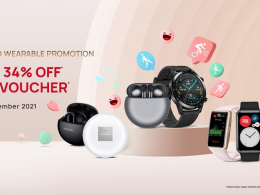 [$1 PROMO] Huawei Audio and Wearable Sale – enjoy up to 34% off on HUAWEI products and $1 promotion on MateBook D 15!