[Update – Oct. 11: More complaints against the same man in the conversations below. Two more freelancers accused of sexism and Juwon Park resigns, prepares to leave Singapore.]

[Update – 5 Oct, 8.19pm: Mediacorp has responded to the allegation and made this statement: “Mediacorp does not condone sexism in our workplace. We take a serious view to this matter and are investigating.”] Kudos to the Mediacorp team for their swift action.

In a public Facebook post since taken down or made private from  Channel NewsAsia TV Producer/ Journalist, Juwon Park’s Facebook account, she allegedly took issue at the apparent sexism that one of her unnamed colleagues exhibited in a previous undocumented conversation.

From her LinkedIn profile, Park is currently working at Mediacorp as a producer for Money Mind, a half hour English-language show encompassing all things business. She previously interned at Google, Bloomberg and the Associated Press in various news media roles.

Although Park was quick to remove her posts, the forum users at EDMW were able to get screenshots before they were taken down.

Take a look at the screengrabs of her posts to judge if her allegations ring truth: Here’s a closer look at the conversation

It seems like Park is sending a lengthy message to a colleague about a conversation they had recently. In the conversation, she enumerated the things that her colleague said that she thought was wrong.

Park then said that she would like her colleague to replace the words “boobs” with “dick” and “girls” with “men” in the posted conversation, to turn the tables.

Finally, she called the conversation with this colleague sexist, and expressed being belittled and hurt. In the next screengrab, you can see that the colleague apologised and claimed that what the person said was meant as a joke. The colleague then goes on to say that from their experiences in Germany, Australia and Singapore this was how the industry worked.

The person said that unless Juwon was super pretty or had breasts (implying a large chest measurement), then she would not be judged. 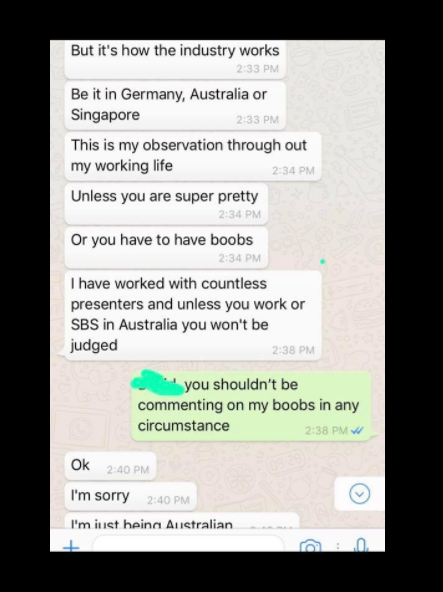 Park then said that the colleague should not have made any comments on her breasts in any circumstance. The colleague then apologised again and mentioned that he would treat Park to lunch or coffee. It may also be inferred from the conversation that Park’s peer is Australian.

This isn’t the first time that Park mentioned sexism in relation to her work in media. Here’s another post taken from EDMW: Park could have been posting this in relation to the conversation, but there was no clear indication.

In the post above, she mentioned Singapore culture could be something she could not understand and that she should be happy to be getting such comments.

Trust the Singapore netizens to give their two cents about this issue. Here are some of their reactions:

One netizen pointed out the lack of women large-sized breasts in Mediacorp.

Others said that some presenters are “flat.”

Since Park is Korean, some netizens say that the culture in Korea is much worse than in Singapore.

Other netizens say that Park got her jobs primarily because of the way she looked.

One netizen said that they had looked through Park’s Facebook page, and had inferred that Park is an “indoctrinated feminist.”

One commenter said that some of the things done to Park as mentioned in her post are things he would never do with his female colleagues.

What do you think of this issue? Let us know in the comments!

The allure of a private island is usually reserved for only the wealthiest of billionaires. But ownership and…
byIrone Kim 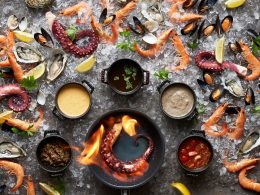 [PROMO] Enjoy 20% off and 1-for-1 promotions with The Capitol Kempinski Hotel Singapore’s “Brunchkation Package” happening every weekend!

From 28 February, The Capitol Kempinski Hotel Singapore will transform the weekend into a luxurious epicurean experience by…
byIrone Kim

Foodies alert! If you are like me and like to take #foodporn pictures of your food before tucking…
byalvinology