Li Hongyi, Li Shengwu – who are they and what do they do?

A certain family spate has been going for almost a week now and two members of the third generation – Li Hongyi and Li Shengwu – have been in the spotlight.

Not many would have been taken notice of the two Lis. If you recall, the young men gave a moving eulogy at their grandfather’s funeral in 2015 –  Singapore’s founding Prime Minister Mr Lee Kuan Yew.

Well, in case you still don’t know, they are cousins.

Who is Li Hongyi?

Who is Li Shengwu? 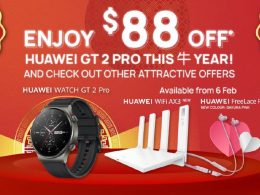 [SALE] Celebrate Valentine’s Day with these Huawei Deals, enjoy up to S$88 OFF on Huawei products!

This February, Huawei is introducing its first quad-core Wi-Fi 6 Plus router, the HUAWEI WiFi AX3 in Singapore…
byIrone Kim

Casio Singapore today announced the release of the exclusive ‘Master of G’ Collection of designer robot figurines in…
byalvinology
Hello. Add your message here.
See how Snapask has been helping out over 3 million students around the world. Find a perfect plan