May The 4th Be With You: Here’s how to celebrate Star Wars Day in Singapore

What’s an anniversary without a celebration? As part of ‘May the 4th’ celebrations and to mark the 40th anniversary since the release of Star Wars: A New Hope, a three-day extravaganza called STAR WARS DAY: MAY THE 4TH BE WITH YOU Festival will take place at Gardens by the Bay from May 4 to 6.

Here’s what you can look forward at the festival and be transported to a galaxy far, far away:

When dusk falls, the Marina Bay skyline will be further illuminated with the Sabertress light-up. This is Southeast Asia’s largest lightsaber light-up activation where the iconic Supertrees at Gardens by the Bay will be transformed to glow in resemblance of lightsabers, the weapon of choice of the Jedi and Sith warriors.

May 4 to 6, 8pm to midnight at Supertree Grove

The Garden Rhapsody take on a Star Wars theme as it debuts a dazzling 15-minute music and light composition set against the Star Wars soundtrack.

Standing guard at the Supertree Grove is the iconic All-Terrain Scout Transport (AT-ST) – first introduced in Star Wars: The Empire Strikes Back. A mainstay on-ground throughout the festival, this is your chance to get up close and personal with this towering replica. For a closer look, head up onto the OCBC Skyway for an aerial perspective of the two-legged, armored walker set against the panoramic Marina Bay skyline.

Get ready your Snapchat, Instagram story, Facebook Live and all the social media accounts you have. Chewbacca, one of the heroes of the Rebellion, and Kylo Ren, dark warrior from the First Order, will be in Singapore for the festival. Whichever side of the Force you are on, you will not want to miss out on the chance to take a photo with these two characters.

May 4 to 6 at Supertree Grove. Click here for timings.

Fans will unite at the festival to bring you themed activities, demonstrations and exclusive exhibits of vintage toy collections and fan art. Fan club members from the 501st Legion Singapore Garrison; Cathar Base Singapura – Rebel Legion and FightSaber will make an appearance decked out in their screen accurate costumes. Take home commemorative photographs and unique fan art. All proceeds from the sales will go to The KKH Health Endowment Fund.

Experience the magic with family and friends for an outdoor movie screening of Star Wars: The Force Awakens. 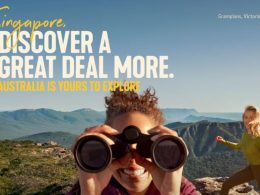 Two decades. That’s how long our vacuum cleaner has been sleeping in a box, kept away in the…
byChitra Kumar